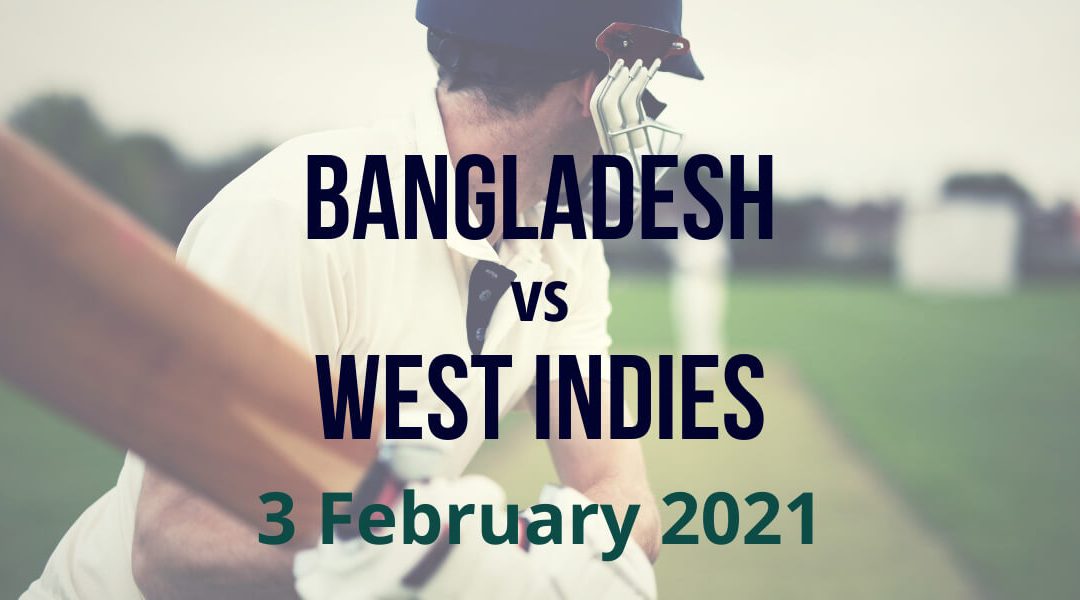 Host Bangladesh will hope to continue their winning streak when they face West Indies in the series's opening game at Zahur Ahmed Chowdhury Stadium in Chattogram on Wednesday.

Mominul Haque will lead Bangladesh for the two-match Test series against West Indies. Earlier this month Bangladesh completed a clean sweep over West Indies in the ODI series. All-rounder Shakib Al Hasan and pacer Mustafizur Rahman have returned to the Test squad after clearing fitness Tests.

West Indies will be desperate to turn things around in this Test series. Captain Kraigg Brathwaite will want to lead from the front and inspire West Indies to put on a confident show in this series opener.

The match is playing on 3rd February at 03:30 am. There's not currently a scheduled live viewing on UK, but keep an eye on Bet365 for any changes to this.

The home side will want to field their full-strength side for this opening Test. Najmul Hossain Shanto will open the batting with Tamim Iqbal for this series. At the same time, Shakib Al Hasan will be slotted into the XI.

In the batting department, the side will rely on an experienced trio of Tamim Iqbal, Mushfiqur Rahim and Shakib Al Hasan to deliver the bulk of the runs.

Since May 2019, Middle-order batsman Mushfiqur Rahim has been a leading run-scorer for Bangladesh in Test cricket. In four matches played, Mushfiqur Rahim accumulated 407 runs at an average of 67.83 with one century and two half-centuries to his name.

Captain Mominul Haque, Mohammad Mithun and wicketkeeper Liton Das will have to produce crucial scores for Bangladesh in this contest.

The onus will be on bowlers Mustafizur Rahman and Abu Jayed to make breakthroughs with the new ball. Nayeem Hasan and Taijul Islam will be two prominent spin options for this contest.

The visitors will want to select their most experienced XI for this contest. Nkrumah Bonner and Kyle Mayers will make their Test debuts for West Indies.

In the batting department, experienced players like Kraigg Brathwaite, John Campbell and Jermaine Blackwood will be expected to deliver the bulk of the runs.

Since Mar 2019, middle-order batsman Jermaine Blackwood has been a consistent performer for West Indies in Test cricket. He has topped the batting charts in this period with 465 runs in 6 Test matches at an average of 42.27 with one century and three half-centuries to his name.

Besides Blackwood, Kraigg Brathwaite, John Campbell and Rakheem Cornwall will need to put in notable scores in this opening clash.

The pace trio of Shannon Gabriel, Kemar Roach and Alzarri Joseph will be required to make early inroads with the new ball. Jomel Warrican and Rakheem Cornwall will be two spinners for West Indies for this opening game.

Given the recent performances and home advantage, host Bangladesh will be outright favourites to win the opening game against West Indies. With Shakib Al Hasan and Mustafizur Rahman's return for the Test series, Bangladesh seemed to have covered all the bases for this contest.

Experienced players like Kraigg Brathwaite, Kemar Roach and Jermaine Blackwood will have to raise their game and deliver the goods if the West Indies aim to compete with Bangladesh.
Expect Bangladesh to register a comprehensive win in the first Test at Chattogram.