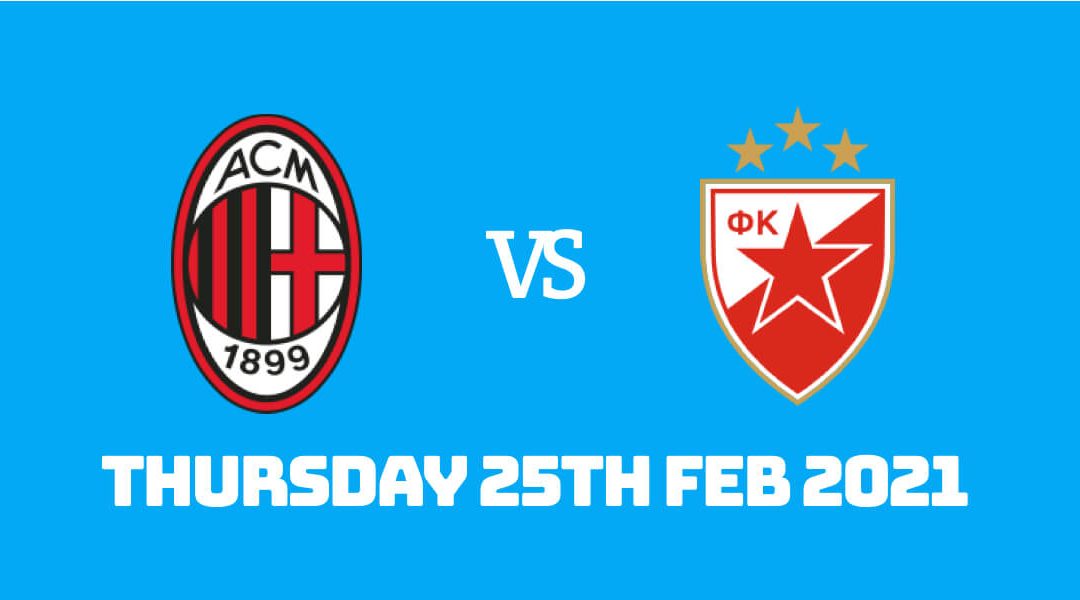 AC Milan host Crvena zvezda with a spot in the Europa League round of 16 on the line after the dramatic 2-2 draw at Serbia last week. Stefano Pioli’s side lost back-to-back league games, including the big derby on Sunday, as they’re now four points behind Inter. Crvena are closing on their fifth title in six years in Serbian Super Liga as they collected 62 of the possible 66 points.

The 3-0 defeat against Inter showed the gulf between the two Milan sides in terms of squad depth and quality. Pioli managed to outperform expectations at Milan as the team appeared the most in-form side in Serie A since lockdown. They keep getting the results despite the team being much affected by injuries and COVID-19.

However, the past few weeks haven’t been good in terms of results, as Milan went three games winless in all competitions. The shock defeat at Spezia knocked Milan off top place for the first time since the reverse fixture on matchday 3. And the last gasp equalizer by ten-man Crvena zvedza denied them a first-leg advantage in Europa League.

Milan derby headlines were dominated by the duel of Romelu Lukaku and Zlatan Ibrahimovic. The Belgian stole the show with a goal and a timely assist for Lautaro Martinez’s opener. Zlatan had two great headers palmed off by Samir Handanovic when Milan piled up the pressure early in the second half.

Dejan Stankovic’s side is heading to an unbeaten season as they only drew two games after 22 matches. They only conceded nine goals throughout and won each of their last ten games since November 2020.
Their preparation for the first leg helped with having no game in the previous weekend. But they were dominated in the first half as Milan created enough chances to lead at the break. Radovan Pankov had a night to forget; he scored an own-goal before conceding a penalty kick that led to another Milan goal.

Gabonese midfielder Guelor Kanga earlier levelled the score for the hosts from a penalty-kick before the Serie A club restored the lead. Milan Rodic, one of the four players with the first name of Milan, was sent off fifteen minutes from time. But Crvena zvezda fought back to equalize with the last kick of the game as substitute Milan Pavkov heads home Kanga’s corner kick.

The first win against Milan would see Crvena zvezda through

Despite the dramatic draw, Crvena zvezda could still be required to win at Milan as Pioli’s side has the advantage with the two away goals scored in Serbia. Milan knocked out the Serbian outfit in both of the previous two knockout stage meetings between the sides.

Ismael Bennacer missed the derby after he sustained a muscle injury during the game at Serbia, and Milan once again had an unbalanced midfield without the Algerian. Mario Mandzukic also started that game, but he has similar problems that could rule him out of the return leg.
Rodic will not be available after his red card last week. Strahinja Erakovic and Aleksandar Katai are the only other unavailable players for the Serbian side due to injuries.

Can Milan do enough to progress in Europe?

Pioli’s side struggled in recent weeks, but this is a good opportunity to get back into the groove for the rest of the season. There is a chance that they might have to fight for a top-four finish in Serie A with an in-form Atalanta, who beat them at San Siro last month, sit at fifth, only six points shy of Milan.

As much as it’s a challenging competition, winning the Europa League would provide another route for Milan to return to Champions League, besides the club’s first major title in a decade. Crvena’s coach Stankovic, who spent nine seasons at Milan’s city rivals Inter in his playing days, will hope their European adventure ends here.