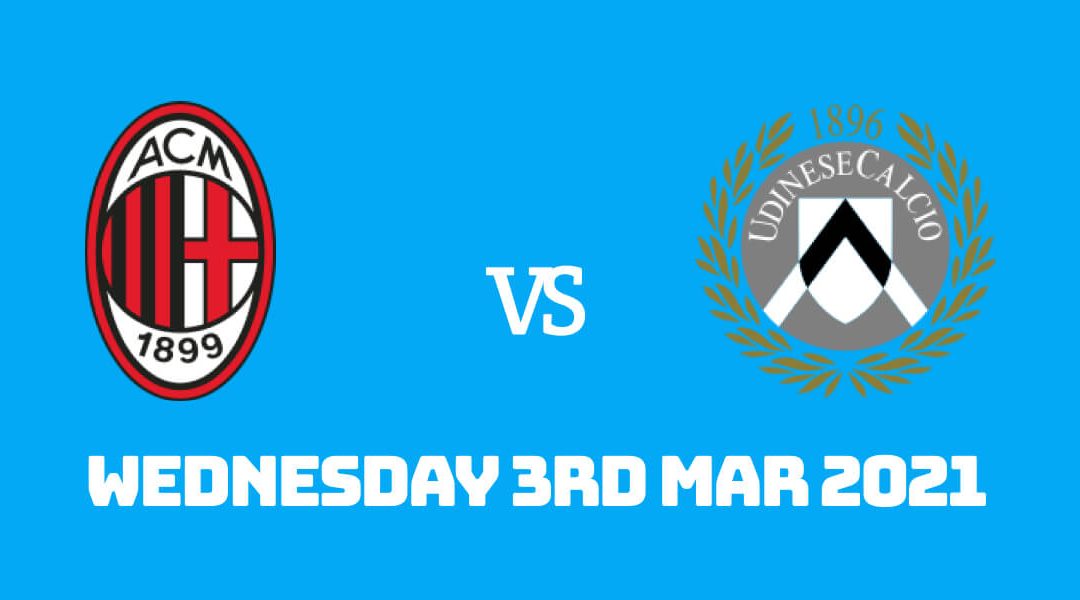 AC Milan hope to continue their pressure on Inter with a home win against Udinese. Stefano Pioli's side responded well to the recent setback with a decent performance and three points from Roma. Udinese extended their lead over the bottom three to ten points with a late win against Fiorentina.

Milan superb in the capital to revive title talks

It was a dominant first half for Milan at Roma as they created a plethora of chances. The Rossoneri should've been well out of sight on the break, but Franck Kessie's strike from the spot was the difference between the sides. It was the 15th penalty kick awarded to Milan in Serie A this season.

Roma pulled back with Jordan Vertout's fabulous strike, but Milan wouldn't be denied on this one. After going scoreless in two successive league defeats, Milan's attacking display was impressive against Paulo Fonseca's side, who struggled against big clubs this season.

Ante Rebic netted a solo effort to secure the three points for Milan as they eased any pressure coming from teams behind them. They extended the gap with fifth-placed Roma to eight points, while Juventus also dropped points at the weekend. Inter are four points ahead of their city rivals at the top of Serie A.

Udinese only lost once in their last six games as they target a top half of standing finish. They currently sit 12th, trailing midtable side Sampdoria by two points. Their home record of late is impressive. They held Inter to a goalless draw before wins against Hellas Verona and Fiorentina.

A comeback draw at relegation-threatened Parma in a hard-fought fixture that saw eleven players booked was a big step in avoiding the drop. Substitute Stefano Okako and defender Bram Nyutinek scored the Udinese goals after they went two behind inside the first 30 minutes.

They once again relied on a late goal to beat Fiorentina on Sunday. North Macedonian striker Ilija Nestorovski headed home Rodrigo de Paul's precise cross four minutes before full-time. In a game where most of the chances came from long-range efforts, the Udine side further distanced themselves from the teams in the final quarter of the standings.

Luca Gotti yet to bet Milan

Udinese's coach faced Milan on two occasions and lost both games. However, he was on the victorious side in his first meeting with Pioli when they were in charge of Serie B sides Trevisio and Piacenza, respectively, in 2008.

Milan won the reverse fixture at Dacia Arena 2-1, thanks to their top scorers Zlatan Ibrahimovic and Kessie.

AC Milan are impressed with England international Fikayo Tomori and are interested in making the move permanent ahead of time. Tomori, who scored an opening goal before it was chalked off for offside, had another great game on Sunday in Rome.

He could start once again ahead of captain Alessio Romagnoli. Milan will be sweating over the fitness level of Ibrahimovic, Hakan Calhanoglu, and match-winner Rebic, however, as the trio substituted off with injuries against Roma.

There are many injury worries for the visitors, including Ignacio Pussetto and Mato Jajalo, who both sustained cruciate ligament injuries. Former Milan winger Gerard Deulofeu, on loan from Watford, will not get a chance to return to San Siro as he's sidelined with a knee injury.

Milan to battle for the three points?

Udinese has no pressure to deliver in this game as Milan expected to take the initiative. Gotti's side is in a great position to keep Udinese in Serie A for yet another season. After returning in the wake of their demotion in the 1993-94 campaign, Udinese remain a constant fixture in Serie A.