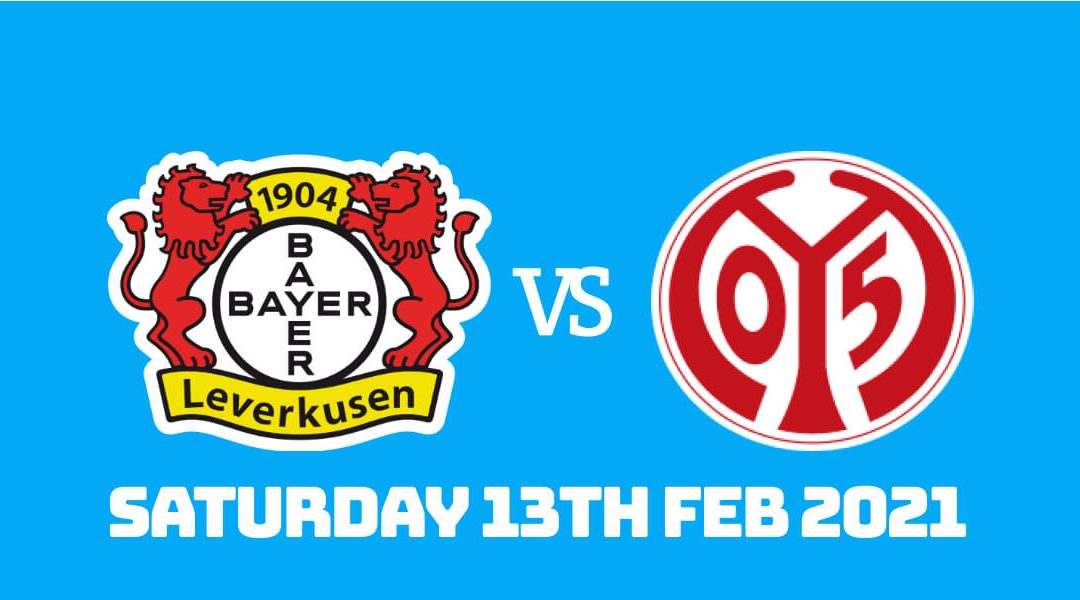 Bayer Leverkusen hope to keep momentum when they host second from bottom Mainz on Saturday. Peter Bosz’s side lost five of the last eight Bundesliga games after going unbeaten in Bundesliga until the final fixture of 2020. Mainz won back-to-back home wins after just two points from their first nine games at Opel Arena this season.

There are no more title talks for Leverkusen after their poor start to the new year. The plan is to return to the Champions League, which will require consistent form from Bosz’s troops considering the number of teams vying for a place in Europe’s premier competition.

On the plus side, they were highly impressive in both of their wins this year. They produced one of their best performances in the first-half against Borussia Dortmund, but they couldn’t build upon it with defeats against Wolfsburg and Leipzig.

Leverkusen returned to winning ways in style with a five-star performance against Stuttgart. Florian Wirtz made history as he became the youngest player to score five goals in Bundesliga. Kerem Demirbay scored a brace in the first half, which is the same number of goals he scored in his previous 40 Bundesliga appearances for Leverkusen.

There was Leon Bailey’s first goal of the year as well as the Jamaican international’s seventh assist of the league season. On a memorable night for the Werkself, Demarai Gray scored on his debut with Leverkusen netting five goals in the league for the first time this season.

The match kicks off at 14:30 on Saturday 13th February 2021, and the entire game is available on to stream on William Hill.

They had to wait until the final week of January to get a first home win of the season, but Mainz followed it up with another last weekend. Both of their wins came against teams playing to qualify for Europe, making it more impressive for the carnival club.

Bo Svensson is the fourth coach to lead Mainz in the Bundesliga this season. The former Mainz defender has worked hard to build togetherness and confidence in the side after they lost their talismanic striker Jean-Philippe Mateta in January. Even after successive home wins, they still are four points shy from safety, however.

While the 3-2 win against Leipzig was sensational, last week’s success over the surprise package Union Berlin was all about hard work. Moussa Niakhate, who scored twice against Leipzig, scored the game’s only goal from a penalty kick.

Two Nico Schlotterbeck challenges on Karim Onisiwo were vital moments in the game. The first resulted in the penalty kick decision and a yellow card for the young defender. The Freiburg loanee saw his second booking for another foul on Onisiwo only ten minutes after the break.

Six wins in the bounce for Leverkusen against Mainz

Leverkusen kept clean sheets in five of their last six games against Mainz. The exception saw the biggest scoreline with a 5-1 win in the 2018-19 season. The previous three games between the sides ended in a similar 1-0 score. Lucas Alario was the scorer in their meeting earlier this season in Jan-Moritz Lichte’s first home game as Mainz’s coach.

Bosz has no new selection worries, but they have one of the longest injury lists in Bundesliga. With the return of the Europa League, the Dutch tactician needs to make good use of the squad. January acquisitions Timothy Fosu-Mensah, Jeremie Frimpong and Gray had a good game at the weekend against Stuttgart.

Pierre Kunde and Robin Quaison could still be unavailable for selection for Mainz’s trip to Leverkusen. New signing Robert Glatzel could feature in the starting lineup for the first time, however. The former Cardiff City striker made his debut off the bench in the win against Union Berlin with Adam Szalai starting a game for the first time this season.

Leverkusen failed to score in recent defeats against Union, Wolfsburg and Leipzig. Still, they have one of the most potent attacking units in the Bundesliga. Mainz conceded two goals per game this season.