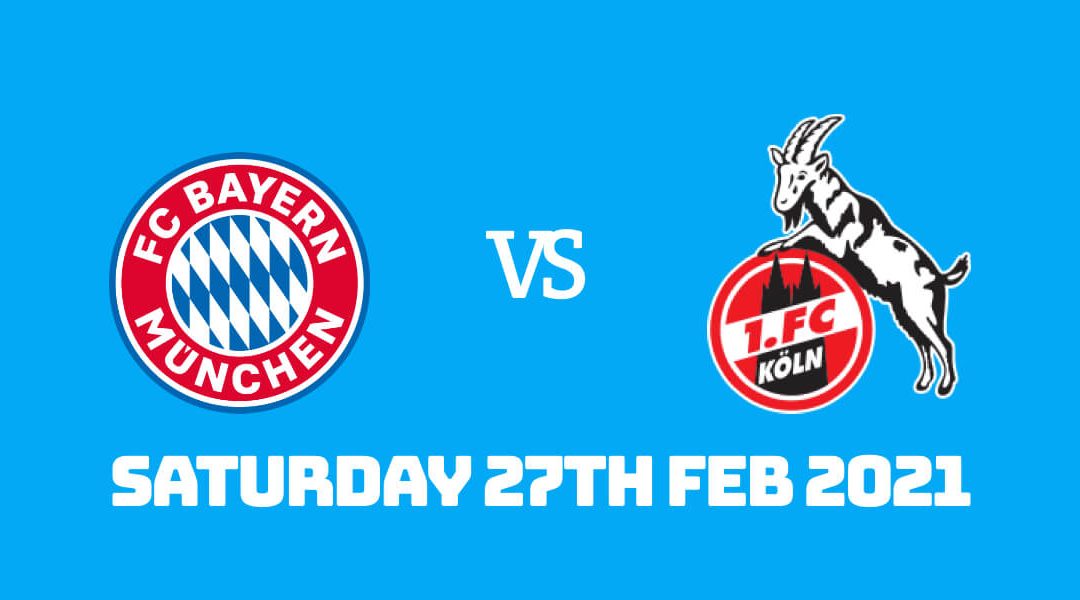 After their dominant display against Lazio, Bayern Munich hope to return to winning ways in Bundesliga when they host Koln on Saturday. Markus Gisdol's side lost two successive games following a memorable derby win at Borussia Monchengladbach.

Hans Flick's troops struggled after returning to league action as world champions. Still, they had no difficulty dispatching Lazio in the Champions League. Robert Lewandowski settled early nerves by taking full advantage of Mateo Mussachio's backpass to score his 32nd goal in 31 appearances this season.

The Polish striker had a decent chance earlier with Joshua Kimmich's darting run in the right flank. Bayern were three in front at the halftime break, but the Italians had a solid shout for a penalty kick before losing hope of a comeback. Sergej Milinkovic-Savic felt Jerome Boateng blocked him at the edge of the box, but both the referee and VAR officials didn't see anything wrong.

Jamal Musiala, who declared that he chooses to represent Germany internationally, and celebrated his 18th birthday in a busy week, scored his first Champions League goal with a measured strike from range soon after. Leroy Sane made it three, with Kingsley Coman's tenacity opening another chance for the Bavarians three minutes before the break.

It was four only two minutes after the second-half kickoff as Francesco Ascerbi diverted Sane's cross beyond Pepe Reyna's reach. The former Bayern goalie had a tough night as the sextuple winners displayed a ruthless performance. Joaquin Correa's consolation goal maintained Bayern's weakness of conceding cheap goals, however.

Koln hope for another shock win

Earlier in the season, Koln pulled off a surprise win at Signal Iduna Park. It came after they went winless in the league for almost a year. Ellyes Skhiri's brace started their revival after a tough start to the season with a solid 2-1 victory against Borussia Dortmund.

The other Borussia, Monchengladbach, were on the receiving end of a shock defeat at the start of this month. This time, another midfielder Elvis Rexhbecaj, who is on loan from Wolfsburg, scored twice as Koln won the derby to ease the pressure from the bottom three clubs.

But the last two defeats and the improved form of teams in the danger zone put Koln back in the equation. Koln failed to score in losses against Eintracht Frankfurt and VfB Stuttgart. They held Bundesliga's in-form side Frankfurt before Andre Silva did what he does best. Against Stuttgart, they were also left undone by the expected attacking threat — Sasa Kalajdzic's header from Borna Sosa's cross.

Bayern unbeaten against Koln since 2011

Mark Gisdol faced Bayern on nine occasions in his time at Hoffenheim, Hamburg and Koln. Still, he's yet to beat the Bavarian giants. Flick, who ended his playing career at Koln, lost to the Billy Goats 5-1 in the only game where he faced them as Hoffenheim coach back in 2002.

Bayern beat Koln 2-1 with two first-half goals in the reverse fixture, but Gisdol's side had enough chances to at least clinch a point against the record champions.

Thomas Muller is back in training after his recovery from COVID-19, but he might not take part against Koln. However, Serge Gnabry is expected to return to the side, as well as Tiago Dantas, who is yet to feature in Bundesliga; Bayern is not likely to sign him permanently from Benfica.

There are no changes in Koln's squad. Sebastian Boranuw and Jonas Hector are closing on a return, while Sebastian Andersson and Florian Kainz are still in rehabilitation.

Bayern going for a statement win?

Leipzig are only two points behind the league leaders Bayern, so there is the talk of a title race back in the Bundesliga. Before Julian Nagelsmann's side face a stiff challenge later on Saturday against Gladbach, Bayern can distance themselves with a comfortable win against the relegation-threatened Koln