Betting Preview: Braga vs AS Roma 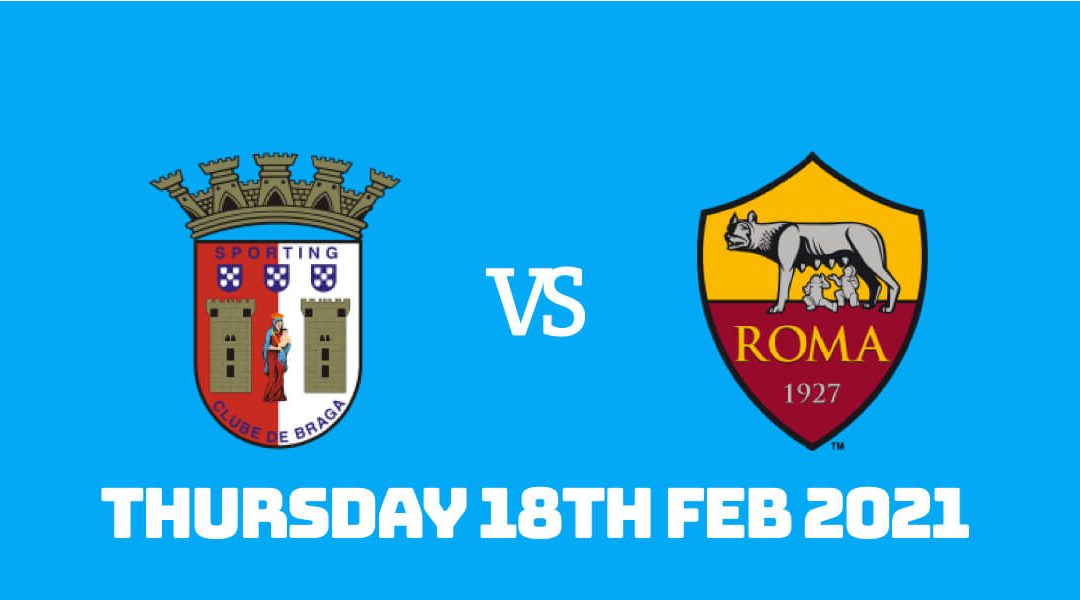 Braga and AS Roma face off in the first round of the Europa League knockout stage. Both teams currently sit in third place in their respective leagues. Roma returned to the top three after their confident win over Udinese and Juventus’s defeat at Napoli. Braga extended their unbeaten league run to five games as they narrowly see off CD Santa Clara on Saturday.

Resilient Braga in a fine form

This is the third successive time Braga reached the knockout stage of the Europa League. The 2010-11 finalists lost on both previous occasions to Olympique de Marseille and Rangers. Carlos Carvalhal’s side enjoyed a decent group stage campaign as they finished level in points with Leicester City.

The English side is the only team they have failed to beat in the group stage, with Jamie Vardy’s 95th-minute equalizer denying them in a six-goal thriller at Estadio Municipal de Braga. However, they only lost once at home in all competitions this term.

Saturday’s league win helped them to put pressure on Porto in second place. They only trailed the champions by a single point in a fight to finish in a direct Champions League qualification spot. The Azoreans were the only club to beat Braga at Estadio Municipal de Braga this season. Cristian Borja, who joined on loan from league leaders Sporting in January, scored the only goal of the game at Santa Clara.

Braga also bought former Chelsea youngster Lucas Piazon in the winter. The Brazilian starlet was on the Blues’ books for nine years, but he spent time on loan in seven different clubs over the years before joining Braga on a free transfer. He only featured three times for the first team of the London club.

The capital club is yet to field new signings Bryan Reynolds and Stephan El Shaarawy. But Edin Dzeko, who nearly left the club in January’s transfer, is back to the side as he came off the bench in their last two games.

Roma struggled to cope with big teams this season, but they’ve got an excellent record elsewhere. After a defeat to Juve, they get back to winning ways against Udinese. Jordan Verteout scored twice in the first-half before Pedro, back after missing the last three games due to a muscular problem, rounded off the score in the final kick of the game.

Paulo Fonseca’s side had an easy route to the knockout stage in Europe as they finished top of their group ahead of Young Boys. Their only defeat came at the group’s bottom-placed team CSKA Sofia after they guaranteed a top place finish. Real Madrid loanee Borja Mayoral scored three goals in the group stage.

The first meeting between the sides

The two teams haven't crossed paths in a competitive fixture before now. However, Roma’s Portuguese manager Fonseca faced Braga seven times already at three different clubs, including at his last job, Shakhtar Donetsk. The former Porto’s coach only lost against them once, which came in his short spell at Pacos de Ferreira.

David Carmo, Francisco Moura, Andre Castro and Iuri Medeiros are likely to miss the first leg of the tie due to injuries.
Long-term absentee Nicolo Zaniolo and defenders Chris Smalling and March Kumbulla aren’t expected to make Roma’s squad in their trip to Braga.

Both teams would hope to rely on their excellent home record to make it to the round of 16. Roma are in fierce competition to finish in a Champions League spot via the league table, but they can’t be ignored for the race to win the Europa League this term. With their new owners, Roma would dream to make things happen in Europe in not so distant future. Braga hope for an upset here as they also face a battle against Porto and Benfica to make it to the Champions League next term.