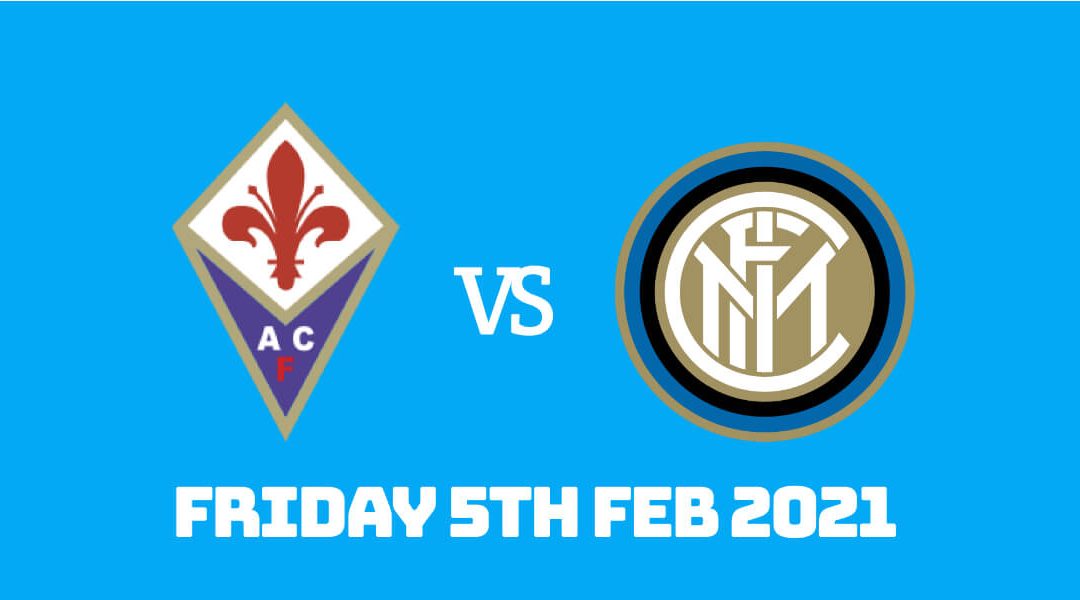 Inter hope to continue their title charge when they face Fiorentina away from home on Friday. Antonio Conte’s side lost the first leg of the Coppa Italia semifinal against Juventus at home in midweek. Fiorentina eased a relegation scare with eight points from the six games since the turn of the year.

The 6-0 defeat at Napoli was Fiorentina’s most significant defeat since they lost by the same scoreline against AC Milan in the 2004-05 season. The team who humiliated nine-times defending champions Juventus at Allianz in their last 2020 game crumbled against Gennaro Gattuso’s efficient side.

But that result didn’t shape Fiorentina’s overall recent form. The Tuscany club collected four points in games against relegation fighters Crotone and Torino after the crushing defeat. They also battled Inter to go all the way to extra-time in the Coppa Italia last month.

Franck Ribery scored his first goal of the season in last week’s game at Torino. Andrea Belotti equalized with only two minutes left in normal time as Fiorentina finished the game with only nine men. The last time a Fiorentina player sent off was in Giuseppe Iachini’s last match at the helm, a goalless draw against Parma.

Cesare Prandelli had a difficult start in his second spell at Fiorentina. The surprise win at Juventus was his first win after seven Serie A games. The former national team coach had his longest managerial tenure when he was in charge of The Violets for five years in the latter half of the 2000s.

Serie A title race to save Inter’s season

Conte’s side knocked out of the European competitions after they finished bottom of their Champions League group. And Tuesday’s home defeat against Juventus in the cup put them in a difficult position as Andrea Pirlo’s side has the advantage before the return leg.

Inter were without Romelu Lukaku and Achraf Hakimi after their suspension, following the fierce derby win in the quarterfinal. But another win against Juve was on the cards when Lautaro Martinez put the hosts ahead following a well-worked move by Alexis Sanchez and Nicolo Barela.

The Argentinian striker had another dry spell in front of goal after scoring a hattrick against Crotone. After going six games without a goal and an assist, he did both against Benevento last weekend. He followed it up with another goal in Derby d’Italia as Gigi Buffon fumbled his first time shot early in the game. But Juve were in front by halftime with a brace from none other than Cristiano Ronaldo.

Both of them needed Inter’s reckless play, however. Ashley Young made an unnecessary challenge on Juan Cuadrado in the box as Ronaldo calmly levelled the score from the penalty spot. The Portuguese megastar took advantage of a misunderstanding between Samir Handanovic and Alessandro Bastoni for the winning goal ten minutes before the break.

Matias Vecino scored two goals for Fiorentina in Inter’s last defeat against them back in 2017. It was a classic encounter as a late Inter recovery didn’t save them from losing 5-4 at Artemio Franchi. The sides have met nine times since then with Inter winning five of them and four draws.
They have already locked horns both in the league and cup this season. Inter scored two late goals to beat Fiorentina 4-3 in the second matchday. Lukaku scored in the 119th minute in the cup to send Inter to the next round

Fiorentina were one of the few active clubs in the January transfer window. Experienced Russian striker Aleksandr Kokorin joined them from Spartak Moscow while Napoli’s Kevin Malcuit arrived at Tuscany in hopes of more playing time. Prandelli will have his complete squad ready for Friday night’s fixture.

Conte was not too happy that their game at Fiorentina was arranged for Friday despite them being in action in midweek. He’ll have both Lukaku and Hakimi in the squad at Florence, however.

Inter to climb the top of the league?

Fiorentina has a good home record as they only lost twice from ten Serie A games this season. Inter only lost once away from home, but they only won half of the ten games on their travels. A win would see Inter climb to the top of Serie A at least until their city rivals Milan host bottom-placed Crotone on Sunday.