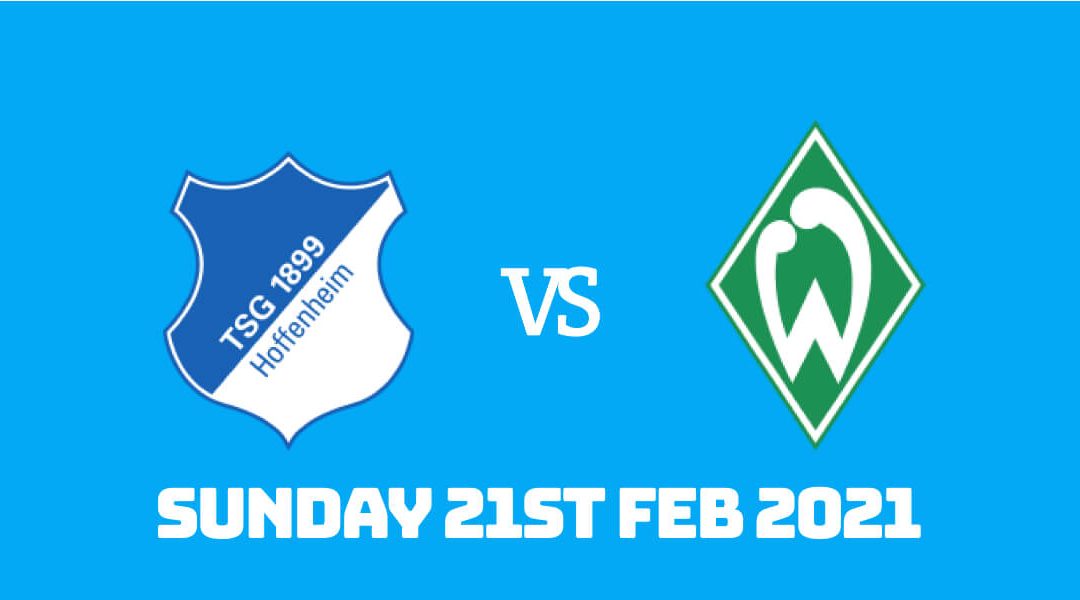 In Sunday’s third Bundesliga game, TSG Hoffenheim host Werder Bremen with the teams tied on points in the standings. Hoffenheim scored in each of their last six games after the horrible defeat at lowly Schalke and a goalless home draw against newly-promoted Arimina Bielefeld. But they’re winless in three in the league and squander a two-goal lead twice to draw 3-3 at Molde in Europa League.

Hoffenheim firing in the goals but susceptible at the back

Sebastian Hoeness’s side is enjoying a memorable season in Europe as they aim to reach the round of 16 in the Europa League. Although the manner in which they failed to hold to their advantage in Norway was frustrating, they’re in pole position to make it through to the next round.

Andrej Kramaric continues to be on the sidelines. Still, both Munas Dabbour and Ihlas Bebou are in good form of late. The Israelian scored 24 goals in Europa League since the 2017-18 season. Bebou is not prolific in front of goal, but his dribbling skills and top acceleration make him one of the most formidable attackers to deal with in Bundesliga.

Hoeness’s side should’ve returned with a win from their trip to Dortmund last week, but lack of sharpness in the final third and a lapse of concentration forced them to settle for a 2-2 draw. Mijat Gacinovic was at fault in either end as the Serbian was never a safe bet to come off the bench when your team is in the ascendancy.

Bremen having an average season after last season’s trauma

It took a playoff win to keep esteemed Werder Bremen from securing their league status last season. They had an awful home record and usually struggled to keep teams at bay. Florian Khofeldt’s team is now in transition as they instilled lots of young players in the squad this term. However, the young coach is on the radar of Borussia Monchengladbach, as the Foals are on the hunt for Marco Rose’s replacement.

They only lost once since the home defeat against Union Berlin in their first 2021 game. Bremen were also the better side in that loss at Borussia Monchengladbach. But they couldn’t follow up an excellent 4-1 win in their home games against Schalke and Freiburg.

Khofeldt’s side is five points clear of Bielefeld, who currently occupy the relegation playoff spot and have a game in-hand against Bremen. The Green and Whites could reach the Pokal semifinal without facing a Bundesliga side if they beat Jahn Regensburg.

Bremen won 12 and only lost 5 from 27 meetings between the sides. But none of the wins came in the last three fixtures between the sides. Hoffenheim did the double over Bremen for the first time last season. This season’s earlier meeting ended in a 1-1 draw, with the goals coming early from midfielders Maximilian Eggestein and Dennis Geiger.

Geiger would be one of the many absentees from Hoffenheim for this game. Stefan Posch, who confronted Erling Haaland when the Norwegian scored the equalizer last week, is the latest one as he became the 11th Hoffenheim player to test positive for COVID-19. Hoeness will not get the services of 12 first-team players for this one.

Summer signing Patrick Erras, who only featured twice this season, is the only Bremen player currently on the sidelines, however.

Winner to open a points gap with their opponent

If there is a winner from this fixture, there would be a three-point gap between the teams. They are currently seven points shy of the top half of the standings, however. Hoffenheim are the favourite for this one as they’ve got the firing power despite their leaky defence and injuries problems.