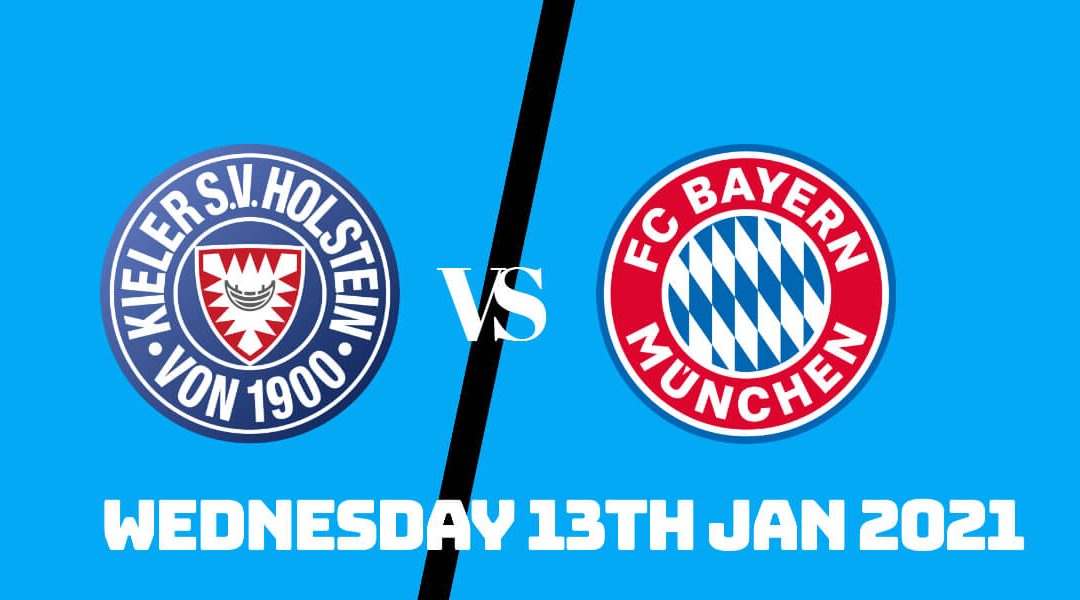 For the first time in their history, Holstein Kiel and Bayern Munich lock horns in one of the two rescheduled DFB Pokal second round fixtures. Hans Flick’s side is under pressure despite still topping the Bundesliga standing. 2. Bundesliga side Kiel was also leading the pack in their division, but they’ve now dropped to third after picking only one point from two games in the new year.

Despite missing out on “The Best FIFA Men’s Coach” award, Flick completely changed Bayern’s fortunes since his arrival. They won it all last season with the club’s second treble, and he followed it with super cup wins both domestically and in Europe. It all happened quickly for the guy whose last head coach job dated back to 2005.

Now the honeymoon time is over, and questions start to pour over Bayern’s playing style and defensive instability. They conceded goals in each of their last ten league games and squandered a comfortable two-goal lead on Friday at Borussia Monchengladbach.

The return of the versatile German international Joshua Kimmich was key in their comeback win against Mainz, but there are now shouts for him to drop to fullback position to bolster the defence. Such moves would weaken the midfield, however, which isn’t the same after Thiago’s departure.
Niklas Sule and Benjamin Pavard have been poor in recent games while Flick still put his faith in David Alaba, a free agent in the summer. The Austrian went out to deny the effect of transfer talks in his form. Meanwhile, Bayern’s record acquisition Lucas Hernandes finds it hard to break into the starting lineup despite his excellent start to the season.

The match kicks off at 19:45 and the entire match is streaming live on Bet365

This would be the first competitive fixture between Holstein Kiel and Bayern Munich. There were six different scorers in Kiel’s 7-1 first-round win at 1. FC Rielasingen-Arlen. Kiel lost in the second round of the cup last season against SC Verl.

Their most memorable cup run was back in the 2011-12 season when they reached the quarter-finals stage without conceding a single goal. It was the first time they reached that far in the cup since 1942/43 as they eventually bow out to the then double winners Jurgen Klopp’s Borussia Dortmund.

They were in fourth-tier in their historic cup run. Kiel reached 2. Bundesliga for the very first time in 2017-18 and they nearly joined the promised land if it wasn’t for a playoff defeat to VfL Wolfsburg. The last two seasons saw 6th and 11th placed finishes, but they’re well on track for a promotion this term.

Ole Werner’s team end 2020 with five successive wins as they finished the year in the top. A defeat to Osnabruck and a draw at St. Pauli meant they slipped to third, but only a point separated them from league-leaders Hamburg. There are only three points between first and fifth in the table after fifteen rounds as 2. Bundesliga is competitive as ever.

The last time Bayern lost in the cup against a lower-division side was against Alemannia Aachen in 2003-04 quarter-final. Aachen is Bayern’s bogey team in the cup as they also eliminated the record champions three years later when they were in the Bundesliga for one season.

Werner would expect his full squad to be available for selection as Noah Awuku, who is yet to feature since his loan return, is the only player on the injury list.

Serge Gnabry back in team training but this game could come too early for him. Flick would probably rotate his side as the Bavarians face another tough run of fixtures with six games in twenty-two days. Joshua Zirkzee, who faced a lengthy ban for his dismissal in the derby for the second team, and the injured Tanguy Nianzou wouldn’t be able to use the rare opportunity.

Bayern to ease their way into the next round?

The last time Bayern lost a second-round Pokal fixture was in penalties against Magdeburg in 2000-01. Although there are problems in the side, only a few sides in the world can keep them from a back-to-back treble. This would be a big occasion for Kiel, but their main target remains promotion to Bundesliga.