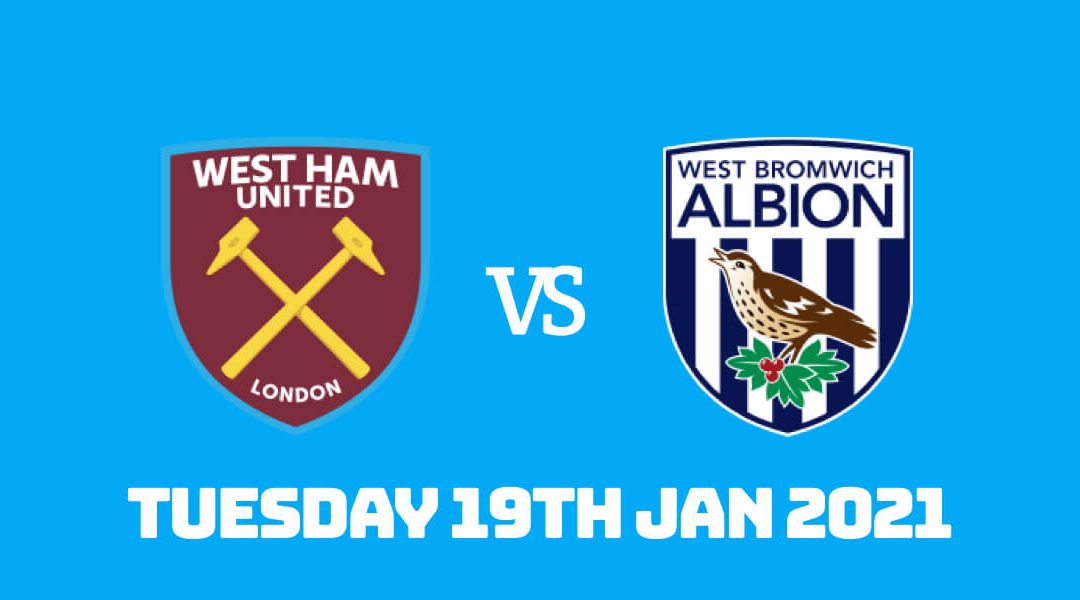 West Ham host West Brom at the London Stadium, in the first of 2 Premier League matches being played on Tuesday evening. A win for West Ham could see them move into the top 6 ahead of Everton. Please keep reading for our free betting tips and predictions.

Qualifying for European competition through league position would be a major achievement for West Ham and winning matches like this is key to that quest. West Ham has kept three consecutive clean sheets and beat Burnley 1-0 at home last time out.

West Ham has a solid home record coming into this match, with only one defeat for the Hammers in their last seven matches at the London Stadium.

Looking into the statistics a little more reveals that West Ham would be in a great position if they score the first goal. They have only lost once after scoring first in a home league game this season, winning four and losing 1.

Michail Antonio scored his 40th Premier League goal for West Ham and Gary Lineker would be proud, as all of them were scored inside the box.

The match kicks off at 18:00 on Tuesday 19th January 2021 and the entire match is available on BT Sport.

Big Sam looking for the greatest of all escapes

West Bromwich Albion shocked many at the weekend with a 3-2 win at arch-rivals Wolverhampton Wanderers. Two of those goals came by way of penalty, so it can be argued that they may have been looking at another reverse, but you must take your opportunities when they come your way.

Goals feature prominently in recent West Brom matches, with Saturday's victory being the fourth successive match to feature over 3.50 goals.

West Brom is 5 points from safety as we reach the half-way stage of the season, but it is unlikely they will smash in another three goals.

If anyone is likely to threaten for West Brom it will be Matheus Pereira. However, you would expect it to be from a dead-ball situation; he has scored four goals (3 penalties & 1 free-kick).

David Moyes has an almost full squad to choose from with only Balbuena and Masuaku missing from his ranks.

Sam Allardyce may welcome Sam Johnstone back into the net after he missed the victory at Wolves due to coronavirus. An already difficult task is compounded because he is missing Conor Townsend, Karlan Grant, Matt Phillips and Grady Diangana.