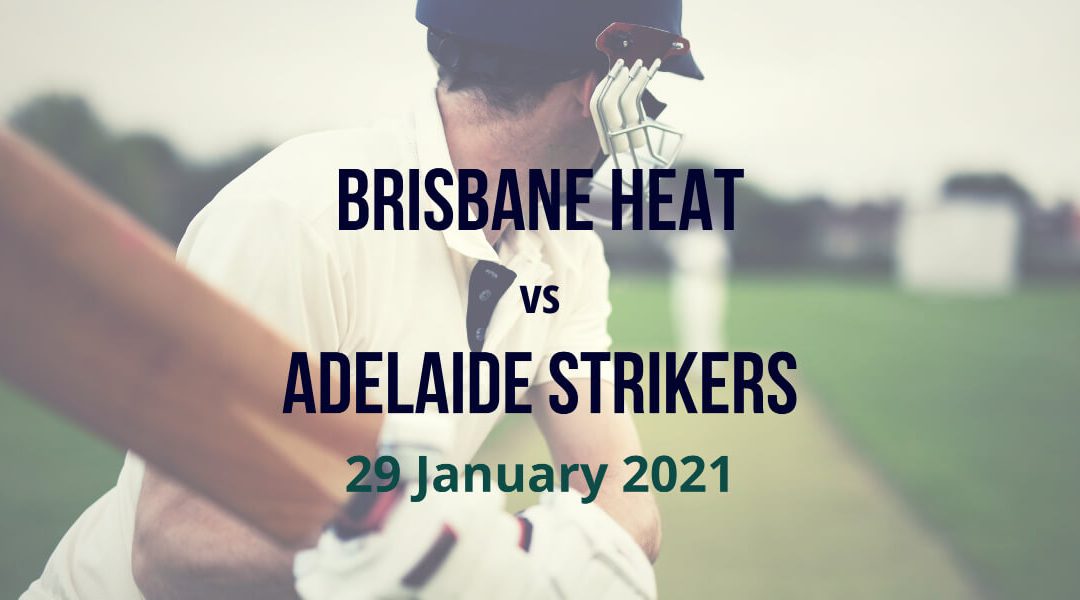 After an exciting end to the group stages, Host Brisbane Heat will lock horns with Adelaide Strikers in the Eliminator game of Big Bash League to be played at The Gabba in Brisbane on Friday.

Brisbane Heat sealed their place in the BBL playoffs by registering a hard-fought win over Melbourne Renegades at Docklands on Saturday night and secured a close win at home against Perth Scorchers at Adelaide on Tuesday.

On the other hand, Adelaide Strikers managed to secure their place in the playoffs by a close margin. The side was able to qualify due to superior net run-rate in comparison to Hobart Hurricanes. In the previous round-robin matches, Adelaide Strikers have managed to come out on top on both the occasions.

The match begins from 08.15 in the UK and the entire match is available on BT Sport.

Chris Lynn-led unit managed to get some momentum going at the back end of the competition with back-to-back victories against Melbourne Renegades and Perth Scorchers.

In this must-win game, Chris Lynn will be looking to lead from the front and get Brisbane off to a brisk start.

The inclusion of Marnus Labuschagne has bolstered the batting resources for Brisbane Heat for this playoff game.

In the batting department, the onus will be on the in-form players like Chris Lynn, Max Bryant and Marnus Labuschagne to deliver the bulk of the runs.

Chris Lynn is currently franchise leading run-scorer with 420 runs in 10 matches at a strike rate of 157.30. He has scored five half-centuries this season. Lynn’s opening partner, Max Bryant, has shown consistency at the top of the innings and accumulated 302 runs in 14 matches.

In the bowling department, the side will be relying on the likes of Jake Wildermuth and Mark Steketee to make crucial breakthroughs.

Pacer Mark Steketee has been standout bowler for Brisbane Heat so far this season. The 27-year old has claimed 22 wickets in 13 matches at an average of 21.18. In the final round-robin match, Steketee conceded 54 runs and failed to take a wicket in his four overs. The team management will be hoping that they can make a strong comeback in this Eliminator game.

2017-18 BBL Champions suffered defeat in their final round-robin game in a rain-affected played against Sydney Thunder played at Adelaide Oval.

Captain Travis Head will hope that the side can bring their A-game to the table in this Eliminator game.

In the batting department, the onus will be on the top-order trio of Jake Weatherald, Alex Carey and Philip Salt to make crucial breakthroughs.

Wicketkeeper Alex Carey has shown tremendous consistency with the bat for Adelaide Strikers. He is currently franchise’s leading run-scorer with 412 runs in 12 matches at an average of 34.33.

Opener Jake Weatherald has produced notable scores for Strikers at the top of the innings. Let-hander has accumulated 401 runs in 14 innings with three half-centuries to his name.

Besides Weatherald, Philip Salt and Jonathan Wells have contributed with crucial scores for Strikers this season.

In the bowling department, the side will be relying on pace trio of Peter Siddle, Wes Agar and Daniel Worrall to make crucial breakthroughs.

Pacer Wes Agar has been a standout performer for Strikers so far this season with 21 wickets in 14 matches at an economy rate of 8.23.

Chris Lynn is one of the most destructive players in the T20 format. Given that the Eliminator game will be played at The Gabba, Lynn will be determined to produce something special with the bat for Brisbane Heat.