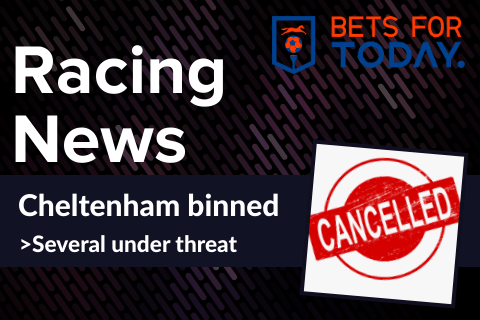 Unfortunately, Cheltenham's New Year's Day racing has been cancelled as the track is waterlogged in several places. This means we will no longer have the pleasure of watching the Dipper Novices' Chase and the Relkeel Hurdle.

Cheltenham's clerk of the course Simon Claisse had originally planned for an inspection at 08:30 on Wednesday morning. However, the course was deemed to be unraceable in parts, therefore the decision was made earlier.

A mind-blowing 85mm of rain has fallen at the course in the past week alone. This has created unsafe conditions for horses and jockeys alike. ITV will be rejigging their live broadcast, as Cheltenham was to be shown live alongside racing from Musselburgh.

Good news is that Musselburgh still looks like it is going ahead at the moment. However, New Year's Day racing at Exeter may be under threat as officials monitor the threat of frost and forecast snow flurries.

Several other meetings this coming weekend are also looking precarious due to the weather, with Hereford calling an inspection at 14:30 today as the course is unraceable and waterlogged in various places.