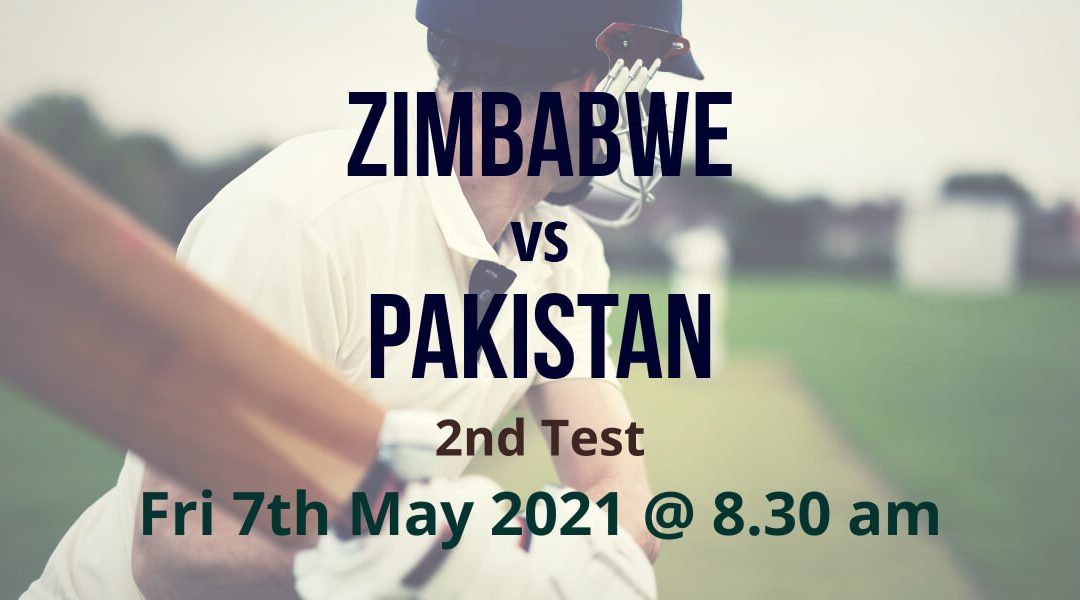 Host Zimbabwe will face a stern test when facing Pakistan in the second and final game of the Test series at Harare Cricket Stadium on Friday.

Zimbabwe missed their full-time captain Sean Williams in the first Test. After recovering from injury, Williams is expected to be back in the XI for the series finale.

The visitors will be all geared up to deliver a clinical performance with bat and ball in this fixture. Captain Babar Azam will hope that the side can inflict a clean sweep over Zimbabwe in the Test series.

In the series opener, Pakistan completely outplayed Zimbabwe in all three departments. They registered a dominant win by an innings and 116 runs.

Zimbabwe v Pakistan 2nd Test match gets underway at 8.30 am and will be showing on Free Sports TV.

For Zimbabwe, this will be an excellent opportunity to turn their fortunes in the final game. They were thrashed by Pakistan in the first Test. The Sean Williams-led unit will be looking to spring a surprise and deliver a strong show against Pakistan.

The responsibility will be on Sean Williams, Tarisai Musakanda, and Brendan Taylor to deliver the bulk of the runs with the bat.

Bowlers Blessing Muzarabani and Luke Jongwe will be leading the pace attack. In contrast, Tendai Chisoro and Milton Shumba will share the spin department. Luke Jongwe is expected to make his debut for Zimbabwe; Richard Ngarava was expensive in the first game of the series.

The visitors will look to deliver another pitch-perfect performance and end their tour on a high in this final Test. The side will go in with an unchanged XI for the last game of the series.

The team will be dependent on the experienced batting trio of Azhar Ali, Babar Azam, and Fawad Alam for the bulk of the scoring. The opening pair of Imran Butt and Abid Ali will have to get the side off to a good start.

Pakistan will hope that captain Babar Azam spends valuable time at the crease, getting back amongst the runs. Since being named Test captain for Pakistan, Babar Azam hasn't reached three figures in red-ball cricket. He will be determined to deliver big innings against Zimbabwe.

Imran Butt, Abid Ali, and wicket-keeper Mohammad Rizwan contributed generously to the team's cause in the first Test played at Harare.

Fawad Alam continued his excellent comeback to Test cricket, He notched up another splendid century to help Pakistan score more than 400 runs in the first game of the series. The left-hander will be looking to continue his rich vein of form with the bat in this series finale.

The focus will be on Shaheen Shah Afridi, Hasan Ali, and Faheem Ashraf to make early breakthroughs with the new ball. After making his comeback for the national side this year, pacer Hasan Ali has shown excellent form in the five-day format.

The 26-year old was the star of the show with the ball in hand, claiming nine wickets in the series opener in Harare. He will be keen to continue his impressive form for Pakistan in this series finale.

The pitch at Harare Cricket Stadium is expected to provide an interesting contest between bat and ball. The spinners will not find much assistance for this game.

Fawad Alam has done exceedingly well for Pakistan since making his comeback in Test cricket last year. The left-handed batsman will undoubtedly be eyeing a big score against Zimbabwe in the final game of the series.

After analyzing both the teams, Pakistan will be clear favourites to win this final Test against Zimbabwe. The visitors have enough firepower and experience in their batting and bowling department to dismantle Zimbabwe in this final game. Zimbabwe's inexperienced batting lineup will have to do something special in a bid to level the Test series.

Expect Pakistan to register 2-0 whitewash over Zimbabwe in the Test series.