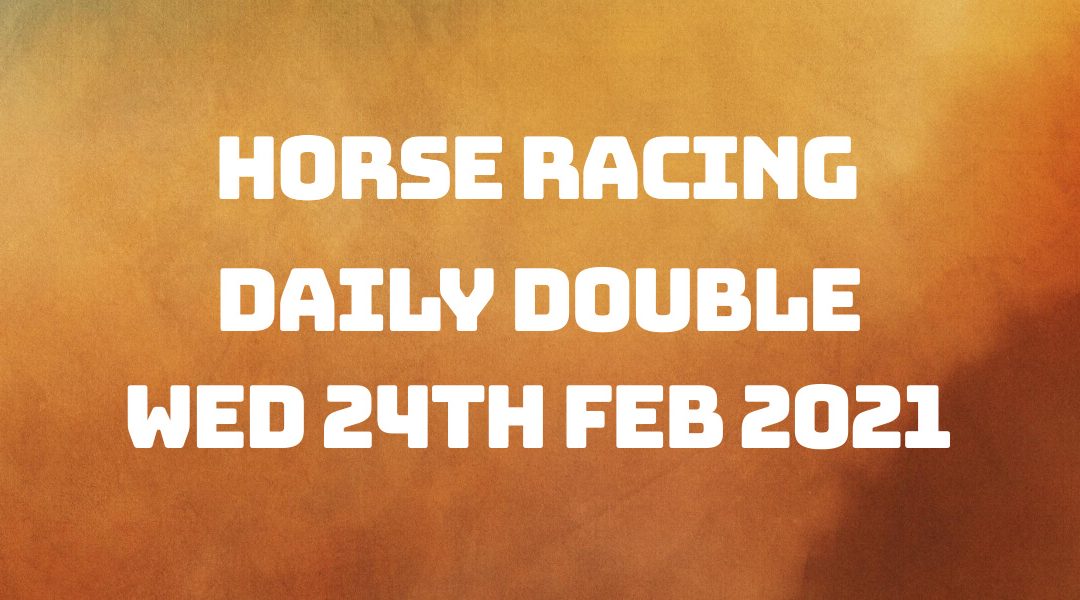 Yesterday our first selection Allavina ran in the 1.00 pm race at Taunton and won very nicely for us by six and a half lengths, at odds of 13/8 SP at the bookies.

He tracked the leaders and went second with three left to run, then took the lead with two to travel and went ahead smoothly to land the win for this first race of our double.

Our second selection Relkadam ran in the 2.15 pm race at Wetherby and won by an impressive eleven lengths, at odds of 7/2 SP at the bookies.

He started the race by being held up but soon made headway and was prominent seven furlongs in. Joined the leader with four left to go, then took the lead with three still left to run before extending his lead nicely to land a well-deserved win.

So we did it. We landed the double yesterday, at odds of 11.81 SP. Very happy with this return.

Today's first selection is Onchan and runs in the 4.15 pm race at Ludlow.

The going is classed as heavy at Ludlow today at this turf jumps meeting. The race is a class four Maiden Hurdle, run over three miles. Eight runners are headed to post, and the race is for four-year-olds and over, with the youngest being a five-year-old, the eldest a ten-year-old.

When looking over the other horses in this race, it's quite hard to pick out just the one potential threat, as the form is a little mixed, and many of these haven't run for some time. I would probably say Ranieri could get in the way of us winning, but even then, he doesn't look as strong as Onchan.

Onchan has the resounding majority of tipster selections at fourteen, with just Minella Royale having any further tips – just one awarded. It looks like the tipster panel can only see one horse winning this race.

Nigel Twiston-Davies is our trainer today for this first selection in our daily double and has a recent run to form record of fifty-five per cent currently. He's had three wins from his last twenty-nine entries and managed to land a place in four other races.

Sam Twiston-Davies is the jockey on board, so keeping this one a family affair today. He has won four of his last thirty-four rides and placed in eight of these. Sam generally rides for Nigel as a rule but has ridden for other trainers lately.

Onchan last ran thirty-four days ago and was ridden by Sam in his last race, where he finished in second position by one and a half lengths. Before that, he had a fifty-seven-day break, then the races before that have been a little mixed with frequent breaks in between runs. However, he does seem to have turned a corner lately and looks set to have a good run today.

Today's second selection is Robinshill and runs in the 4.45 pm race at Ludlow.

As we've already discovered, the going is classed as heavy today here at Ludlow. The race is a class three Handicap Hurdle over a distance of two miles. Nine runners are competing, and the age criteria is for four-year-olds and upwards. The youngest is a five-year-old, the eldest a ten-year-old.

Robinshill is on fire at the moment and has won his last three races in a row. A potential spanner in the works could be Ey Up Rocky, which I don't think the bookies currently agree with, being priced up at 9/1 as it stands. I believe that Robinshill will win this race in some style today; the competition doesn't look too strong in this race for him.

Robinshill has seven tips to his name, four for Nordic Combined and two for Lisheen Castle and Ey Up Rocky.

Nigel Twiston-Davies is also our trainer for this second leg of our double of the day and has a recent run to form figure of fifty-five per cent and a fourteen-day win strike rate of ten per cent.

Sam is on board for Nigel in this race and has a twelve per cent strike rate for the win over the last fortnight. They look to have come here today at Ludlow to win and should go close for us for our double.

Robinshill last ran ninety-three days ago and has a dual course and distance win to his name encouragingly. His last three sequential wins have had J Nailor on board, but Sam has ridden and won on him previously too. He has won by a very healthy eighteen lengths here at Ludlow in his last race; he needs to replicate that success once again for us today.

Currently, you can get odds for the double of 6.67 over at BetVictor.
4/6 for Onchan and 3/1 for Robinshill.