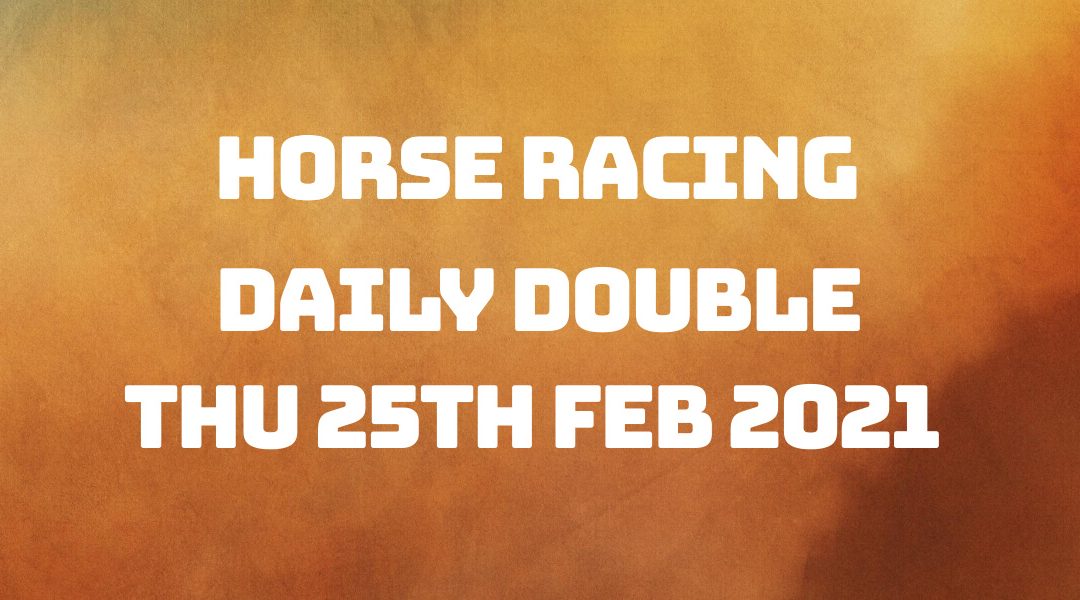 Yesterday our first selection Onchan ran in the 4.15 pm race at Ludlow and finished in third position from eight for a place, at odds of 4/7 SP at the bookies.

He started well and was leading by the ninth furlong, however at the second, he seemed to lose his positioning and lost ground somewhat to finish in third.

Our second selection Robinshill ran in the 4.45 pm race at Ludlow and finished just out of the placings in fourth position from eight, at odds of 5/1 SP. So it looks like he slightly fell out of favour judging by the price drift just before the off.

He started well when leading from the start. However, he then lost ground and weakened in the final stages of the race. It just wasn't going to be his day today. So no luck for the double yesterday, unfortunately, with neither of our selections winning. Let's see how we do today.

Today's first selection is Interconnected and runs in the 12.30 pm race at Huntingdon.

The going is soft over at this jumps meeting. The race is a class four Novices' Hurdle, running over a distance of two miles. Six runners are headed to post, and the age criteria is for four-year-olds and upwards. The youngest is a four-year-old, the eldest a seven-year-old.

Form doesn't look to be particularly strong amongst this group of horses today. Still, I think if I had to pick out one other horse that could pose a threat, it would have to be Hamilton Dici, who won his last race at Warwick. He was sold by Nicky Henderson to Dan Skelton a fair few months back now, but I'm pretty sure Dan would have been putting him through his paces on the gallops and is in fine form lately.

Interconnected has nine tips to his name, four for Hamilton Dici and just the one for Hamilton's Fantasy.

Dan Skelton has a recent run to form figure of forty-nine per cent. He has won thirteen of his last fifty-one selections over the last fortnight, placing in twelve other races. Probably the best trainer in the country as things stand.

Harry Skelton is our jockey on board, as is usually the case when Dan Skelton is the trainer. These brothers are certainly cleaning up lately, for sure. Harry has won twelve of his last thirty-eight rides, managing the place on seven other occasions over the previous two weeks.

Interconnected last ran seventy hundred and twenty-seven days ago; let's say he's had one very long break since he last ran a competitive race. In his last race, back in March 2019, he placed second at Newbury in a class four event; the time before that in 2018, he won by twenty lengths at Larkhill racecourse. I find it fascinating that he's had such a long time off, but with Harry's skills as a trainer, this will be one race I will be watching very closely indeed.

Today's second selection is Fable and runs in the 1.00 pm race at Huntingdon.

The going is classed as soft at Huntingdon, in this class four Maiden Hurdle race. The race over a distance of two miles and four and a half furlongs and has fourteen runners competing. The age criteria is for four-year-olds and upwards, with the youngest being a six-year-old, the eldest and eight-year-old.

Fairfield Ferrata looks the one that could cause an upset, despite his odds currently standing at 33/1. His last race was over heavy ground, where he didn't do too well. However, on other ground surfaces, he's always up there amongst the leading pack. So I wouldn't write him off based on price. Fable looks to be a solid choice, though, for Nicky Henderson.

Fable has nine tips to his name, Lady Of The Night five and no further tips for any other horses in the race.

Nicky Henderson has a recent run to form figure of forty-seven per cent and has won four of his last thirty-seven races. He's placed in ten additional races over the previous fourteen days.

Nico de Boinville is the jockey on board Fable and has won three of his last twenty-five rides within the previous two weeks and placed in six other races over the same period. The two have worked together plenty of times previously. Nico looks to be the jockey that Nicky tends to favour when making his bookings.

Fable last ran twenty-one days ago, so he should be fit and race-ready today for this event. In his last race, ridden by Nico, he took second place in a class four race at Wincanton, losing by a neck. Before that, in his debut race, he won very easily by twelve lengths on his debut race. He looks set to repeat that excellent form today.

Bet365 currently has both Interconnect and Fable priced at 11/10, which gives a double price of 4.41. Good luck, everyone.