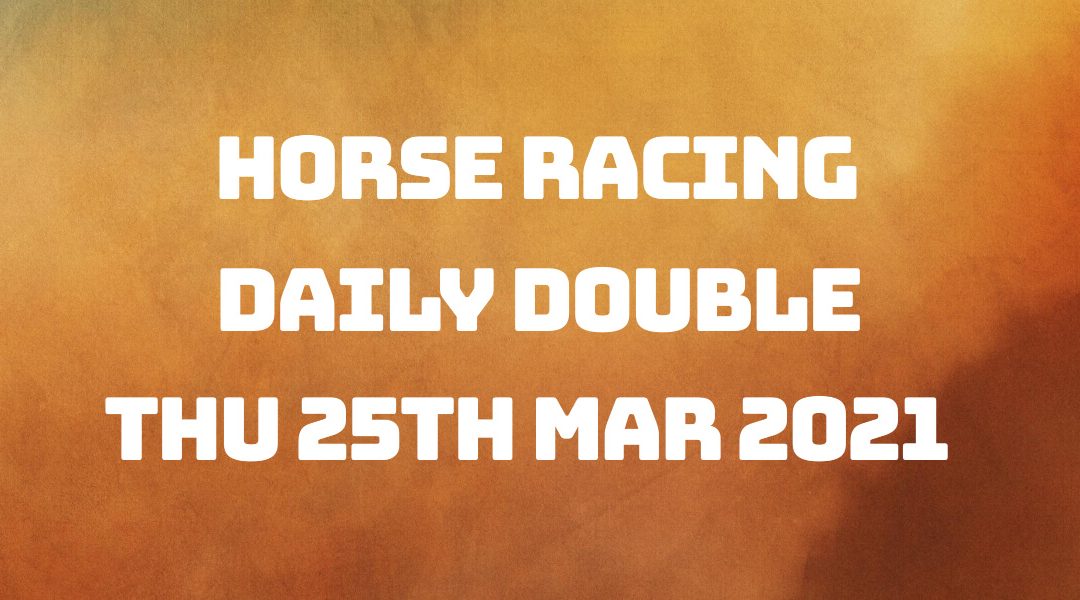 Yesterday our first selection Destinee Royale ran in the 3.12 pm race at Haydock and lost by a shoulder, at odds of 6/4 SP at the bookies.

He jumped well throughout and tracked the leader early on. Disputed the lead after running five furlongs before taking the lead at the fourteenth. It looked like the race was his for the taking, but he just wasn't quite fluent enough and pushed back into the second position at the post. He almost did it, but not quite strong enough.

Our second selection, Aheadfulofdreams, ran in the 2.45 pm race at Hereford and lost by half a length, at odds of 2/1 SP at the bookies.

He ran towards the rear of the pack early on before making some headway after running for six furlongs. He took the lead after the twelfth and went three lengths ahead. However, it wasn't to last, and his lead was reduced in the final furlong when his jockey dropped the whip. From then on, he seemed to lose his mojo and ended up losing his race by a length.

So, no luck for our double today. Two second places once again. It's certainly good to see these running well, though, so I'm sure we'll be counting our winnings once again soon enough.

Today's first selection is Somekindofstar and runs in the 2.15 pm race at Ludlow.

The going is classed as good to soft here today at Ludlow over their jumps course. The race is a class four Novices' Handicap Chase, running over two miles and four furlongs. Seven runners head to post, and the age criteria are for five-year-olds and upwards—the youngest being a six-year-old, the eldest an eight-year-old.

Rock On Rocco would be the one I'd be wary of; he has run very well previously despite having faltered in his last two races. However, he has had two long breaks since then, so whether or not he'd be able to get back into the placings again is the question. Somekindofstar is the one that certainly stands out; with two wins from his last three races, he has to be favoured to win today.

Somekindofstar has six tips to his name, four for Rock On Rocco, three for Eragon De Chanay and just the one for Do Wanna Know.

Lucy Wadham is our trainer for this first leg of our double and has a recent run to form figure of forty-four per cent. She's had two wins from her last sixteen races in the previous two weeks, with an additional two placings over the same period.

Jack Quinlan is our jockey for today and not won any of his races over the last fortnight from twenty-two races. He has placed in four of these, though, so he must be hungry for the win by now. Jack was on board Somekindofstar for his last race, winning comfortably by ten lengths. So if he's able to reproduce that kind of win, we'll all be happy.

Somekindofstar last ran twenty-three days ago and is proven over the distance. In his last race, his ten length win was in a class four race at Leicester, ran over a distance of two miles four furlongs. He had an eighty-two-day break previous to that. In his second race back, he only managed to finish in seventh position from sixteen runners in a class five race at Warwick over two miles, five furlongs. Then three races back, he won by four and a half lengths in a class five race at Market Rasen, over two miles three furlongs.

Today's second selection is El Presente and runs in the 3.15 pm race at Ludlow.

Again running at Ludlow, we've previously discovered that the going is classed as good. The race is a class two Handicap Chase over three miles. Just four runners are running in this race, and the age criteria are for five-year-olds and upwards—one seven-year-old, one eight-year-old, and two nine-year-olds.

Checkitout looks to be the competition to look out for; he won comfortably for Nigel Twiston-Davies last time out in a class four race. But El Presente certainly looks like a staunch competitor for the win today. He is dropping down from his previous race in a class one grading at Wincanton, where he won over a similar distance and is also proven over the ground conditions. I'm very confident about this one.

Checkitout has seven tips to his name, El Presente four, Capeland two and just the one for King Of Realms.

Kim Bailey is our trainer for this second leg of our double, with a recent run to form figure of thirty-nine per cent. She's had five wins from her last twenty-eight races in the previous fourteen days and an additional four that managed to place.

David Bass is saddling up for us today and has won five of his last twenty-five races over the previous two weeks and secured a place in three of these. David rides for Kim almost exclusively and is rarely employed by any other trainers. David has also been on board for El Presente's last three consecutive wins.

Somekindofstar is priced at 9/4 and El Presente at 13/8 with BetVictor currently.
Double odds work out at 5.49. Good luck, everyone.