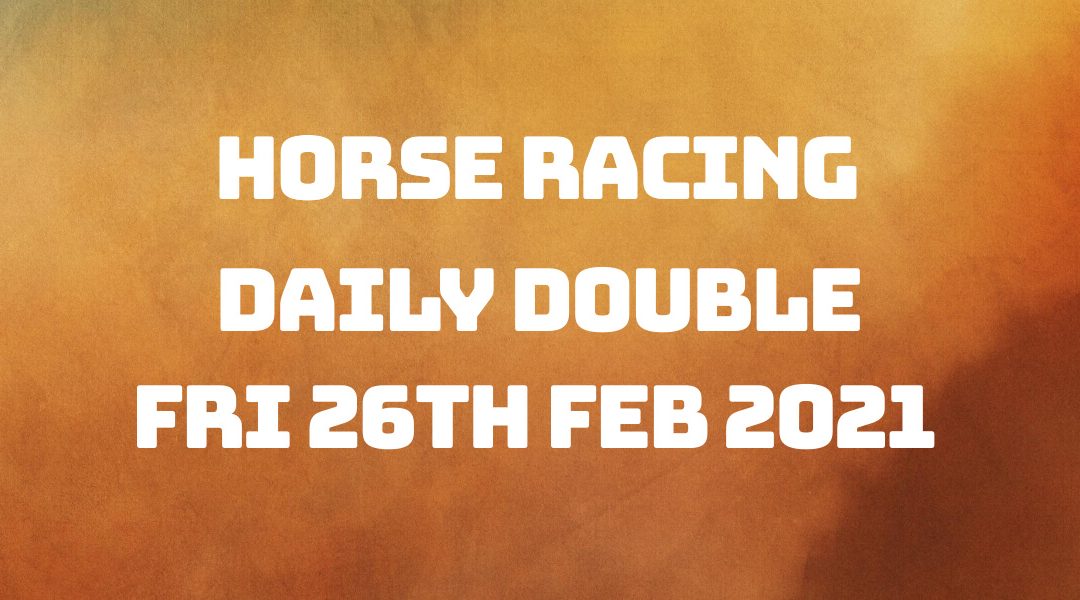 Yesterday our first selection Interconnected ran in the 12.30 pm race at Huntingdon and finished second by one and a quarter lengths, at odds of 2.06 SP at the bookies.

He took a keen hold and tracked the leader before making a challenge at the fourth furlong. Then managed to take the lead with three left to run. However, he seemed to run a little flat and lost the lead right when it counted, so he ended up taking the place as a consolation prize.

Our second selection, Fable, ran in the 1.00 pm race at Huntingdon and won by one and a quarter lengths, at odds of 2.27 SP at the bookies. But as our first leg had let us down, the double was just not for us yesterday.

He chased the leaders and pushed ahead to lead with two left to travel. He ran a little awkwardly and wasn't that fluent but managed to hold on nicely for the win in the end.

Today's first selection is Hold That Taught and runs in the 1.30 pm race at Exeter.

The going at Exeter is classed as soft in this jumps meeting today. The race is a class three Handicap Chase, running over a lengthy three miles. Six runners head to post, and the age criteria is for five-year-olds and upwards. The youngest being a six-year-old, the eldest an eight-year-old.

Highland Hunter could be the one to cause an upset for us today, but I do notice that his last win was over heavy ground, and he only won that race by a neck. So whether he likes today's soft going or not is a question that will be answered today. However, Hold That Taught has proven he does run well on soft going and looks all set to take the win for us today.

Hold That Taught has earnt eight tips for us today, two apiece for Highland Hunter, Dolphin Square and Welsh Saint and finally just the one for L'Air Du Vent.

Venetia Williams is our trainer for this first leg of our double and has a recent run to form figure of forty-four per cent. She has won seven of her last forty-one selections over the last fortnight and placed horses in seven races during this same period.

Charlie Deutsch takes the saddle, and he has won four of his last twenty-five rides and placed in four of these during the previous fourteen days. He generally rides for Venetia Williams but does on occasions ride for other trainers too. The two have a good trainer/jockey relationship in place and have secured many wins over the months.

Hold That Taught last ran forty-eight days ago, and in his last race finished second by just under a couple of lengths in a class three at Chepstow, just shy of today's three-mile distance. Before that, he came third at Ascot, then a close second place by just half a length at Lingfield. So certainly running well and is due to win. Charlie was on board for all three of these past races and many beforehand, so he knows the horse well and will run well today, I'm sure.

Today's second selection is Precious Cargo and runs in the 3.53 pm race at Warwick.

The going at Warwick is soft over their jumps course. The race is a class two Handicap Chase, running over two miles and four furlongs. Nine runners are running, and the age criteria is for five-year-olds and upwards—the youngest being a seven-year-old, the eldest a twelve-year-old.

No particular horse stands out as such, but looking deeper into the form, I'd probably say that Claimantakinorgan may pose a threat. He's run well in higher class races over the years, and Nicky may have picked a good race for him to show his true potential. However, Precious Cargo looks like he can come back strong after his wind surgery and generally runs at the front of the pack.

Nicky Henderson is our trainer for this second leg of our double and has a recent run to form figure of fifty-five per cent. He's won six of his last thirty-three races and placed in a further ten of these during the previous two weeks, so he looks to be in fine form.

Nico de Boinville is the jockey saddling up for us, with four wins from his last twenty-one mounts. He's had places in a further six of these over the last fortnight. Nicky Henderson is almost exclusively using Nico's services lately, and the partnership is proving to be working well.

Precious Cargo last ran one hundred and eight days ago, and he underwent wind surgery recently. This race is his first after that operation. His last race in November 2020 saw him finish second, but that did have only two runners competing. Before that, he had a long break; races previous to this included a series of four races where he fell in one, placed in two and won a class three at Haydock by nineteen lengths. So he certainly has it in him, and we'll see if Nico can bring that out in him today.