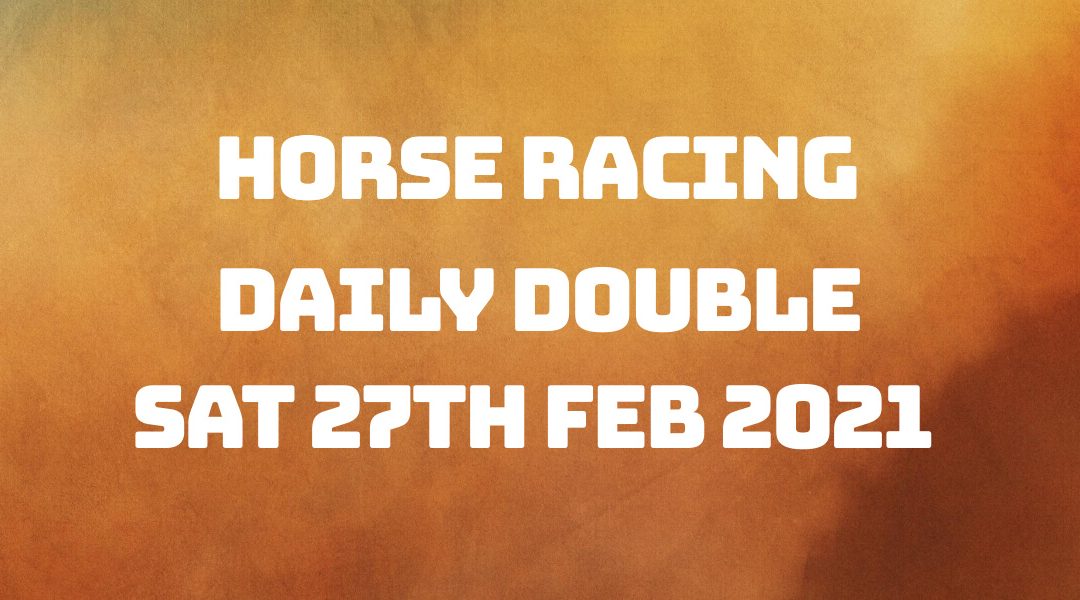 Yesterday our first selection, Hold That Taught, ran in the 1.30 pm race at Exeter, and finished just out of the placings in third position from six runners, at odds of 2/1 SP at the bookies.

He attempted to lead early on before pressing the leader once again eight from home. However, he dropped to the back of the pack at the home turn before making a final ditch attempt to get back in. It was too late and by then had too much to do.

Our second selection Precious Cargo ran in the 3.53 pm race at Warwick and finished fifth from nine selections, at odds of 9/2 SP at the bookies.

He ran well but was held up in midfield for some time. Then made some headway and pressed the leaders after the twelfth furlong before taking the lead with two left to run. But he then weakened on the run-in and had nothing extra to give. Maybe a shorter race next time may suit.

Today's first selection is Tamaroc Du Mathan and runs in the 1.50 pm race at Kempton.

The going is good at this jumps national hunt meeting. The race is a class one, grade two Novices' Chase, running over two miles and four and a half furlongs. Just four runners are competing today and is for five-year-olds and upwards, with the youngest being a five-year-old, the eldest a ten-year-old.

I think it will end up being a two-horse race, with our selection and Ga Law fighting it out in the finishing stages. Ga Law certainly looks to be strong competition for Tamaroc Du Mathan, but we look to have the upper hand with our NAP.

Tamaroc Du Mathan has nine tips to his name, five for Ga Law and just the one for Coole Cody.

Paul Nicholls has a recent run to form figure of fifty-seven per cent and has won seven of his last thirty-seven races. He's also placed in eleven during the previous fourteen days. He is certainly putting a lot of horses out lately.

Harry Cobden is on board and won six of his last forty-one rides, placing in a further eleven races in the previous fourteen days. These two look to be making waves in the racing community and improving over time for sure.

Tamaroc Du Mathan last ran sixty-two days ago and finished second by thirteen lengths in a class one race here at Kempton. Previous to that, he won very nicely by just shy of four lengths in a class three race at Wincanton. Before that, he had a long spell off from racing after some mixed form in races. So he definitely looks to have improved since the break.

Today's second selection is Tamgho Borget and runs in the 4.45 pm race at Kempton.

The going is classed as good today at Kempton, as we discovered above. The race is a class five National Hunt Flat race, running over two miles. Thirteen runners are headed to post, and the age criteria is for four to six-year-olds only. Youngest is a four-year-old, eldest a six-year-old.

There isn't too much form to go on in this race, and several are making their debuts. I think Unanswered Prayers stands a good chance today, even though the bookies don't rate him much; he's at 10/1 currently. He's gone close on his last two attempts, but these were over three miles. So whether a shorter distance will suit him, we'll soon find out. I think Tamgho Borget will take the race, though, and he has already beaten Unanswered Prayers previously. It will be interesting if the two are there or thereabouts again today in this race at Kempton.

Tamgho Borget has five tips to his name, three for Guardino and one for William Of York, Prince Nino and Howzat Valtat.

Paul Nicholls is our trainer for this second leg of our double and has a recent run to form figure of fifty-seven per cent. As we found out above, he has won nineteen per cent of his last thirty-seven races over the last fortnight and will be hoping to add to that tally again today.

Harry is riding once again for us and has won fifteen per cent of his last forty-one mounts in the previous fourteen days. It will be interesting to see exactly how well these two do today.

Tamgho Borget last ran one hundred and twenty-six days ago, so quite some time ago now. His most recent race was his debut race, where he won by half a length to Unanswered Prayers. That was over in Ireland, so this will be his first race in the U.K.

Tamaroc is currently priced at 5/6 at William Hill, Tamgho Borget at 7/2.
So double odds of 8.25 as it stands. Good luck, everyone.

Have a great day and weekend, and let's hope our selections win for us today. James.