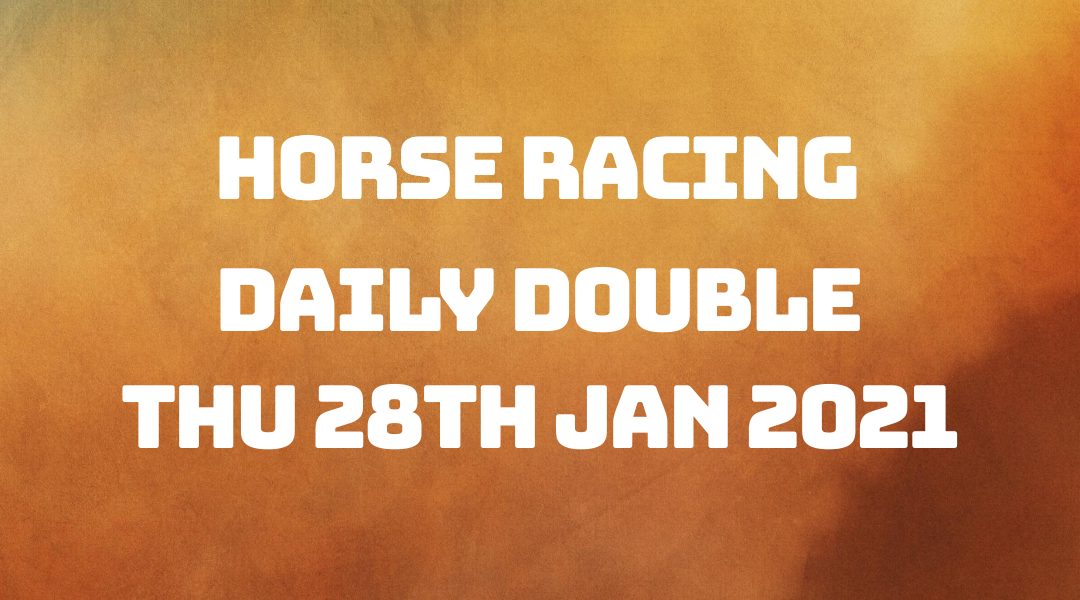 If you're looking for the tip for Friday the 29th January, then please click here

Yesterday our first selection Moohareeba ran in the 5.45 pm race at Kempton and managed to win nicely for us by one and a half lengths at odds of 13/8 SP at the bookies.

He started the race slightly behind the leaders, but successfully managed to find a way through to take second place with seven furlongs left to travel. He made a break for it and took the lead with one furlong out, keeping on nicely for the win.

Our second selection Oud Metha Bridge ran in the 6.50 pm race at Kempton and managed to finish in fifth position out of nine runners, placing at odds of 3/1 SP at the bookies.

Rode in midfield, and pushed along as the race went on to make some impression with two furlongs left to go. However, he soon weakened inside the final furlong and tailed off. Whether the ground wasn't too his liking or the power just wasn't there we'll never know.

With the first selection winning for our double it was a shame that the second let us down, let's see what today brings. Just one or two wins will soon have us back in the game.

Today's first selection is Barden Bella and runs in the 3.00 pm race at Fakenham.

The going at Fakenham is classed as soft for this class five Handicap Chase. The race is over a testing three miles and has five runners headed to post. The race is for five-year-olds and upwards, with the youngest being a five-year-old, and the eldest a ten-year-old.

Jonjoela looks to be the only real threat for us today, with two places and a win, but at 5/1 I can't see the bookies fancying his chances with our selection. Barden Bella has ten tips to his name, with no other horses receiving any tips, other than one of the non-runners. So heavily fancied by tipsters alike today, with me being no exception to the rule.

Christian William is our trainer, with a recent run to form a slightly lower figure than I'd like at ten per cent. No wins from the last ten runners recorded over the last fourteen days, with just the two placings to add in. I don't think Christian's recent form is too much to be concerned about with the odds being rather low.

Jack Tudor is the jockey on board, and he has won just the one race from his last fourteen rides over the last fourteen days, with two placings to add to that total. Christian Williams is a trainer that Jack frequently rides for.

Barden Bella last ran thirty-one days ago and has no course or distance win under his belt yet. His most recent race resulted in a win by an impressive seven lengths at Catterick, so I'm thinking that's why the bookies are running a little scared today with the lowish price. Interestingly, he's running over this distance today, so I'll be watching closely to see how he fares.

Today's second selection is Bay Of Naples and runs in the 3.20 pm race at Southwell.

The going at Southwell is classed as standard to slow for this class five handicap race. The race is run over a distance of one mile and four furlongs and has five runners competing. The age criteria is for four-year-olds and upwards, with the youngest being a five-year-old, and the eldest a six-year-old.

Rafiot looks to be the only danger for us, with two wins and three places to his name, but as he's the top weight in the race, I think that will slow him down somewhat. Bay Of Naples has nine tips to his name, with Rafiot the only horse to be tipped at three. So possibly a two-horse race.

Michael Herrington is the trainer and has a recent run to form figure of twenty-seven per cent. One win to his name over the last fourteen days, from eleven rides, and one further placing to add to that total.

George Bass is our jockey onboard Bay Of Naples and has won three of his last fourteen rides over the last two weeks from fourteen rides, with two more placings to add to that. Michael doesn't appear to have used George's services recently, so I think that he's saved him for this race today.

Bay Of Naples last ran eight days ago, so should be in relatively good form, with a solid course and distance win to his name. His last race resulted in a win here at Southwell over the same distance, and he won that race by two and a quarter lengths. So should be able to replicate that for us today.

At Unibet the double can be set up with odds of 3.64. I don't generally like going below evens for selections, but these two just slip under that at 10/11 currently. At these odds, we should stand an excellent chance of winning today. Good luck everyone.