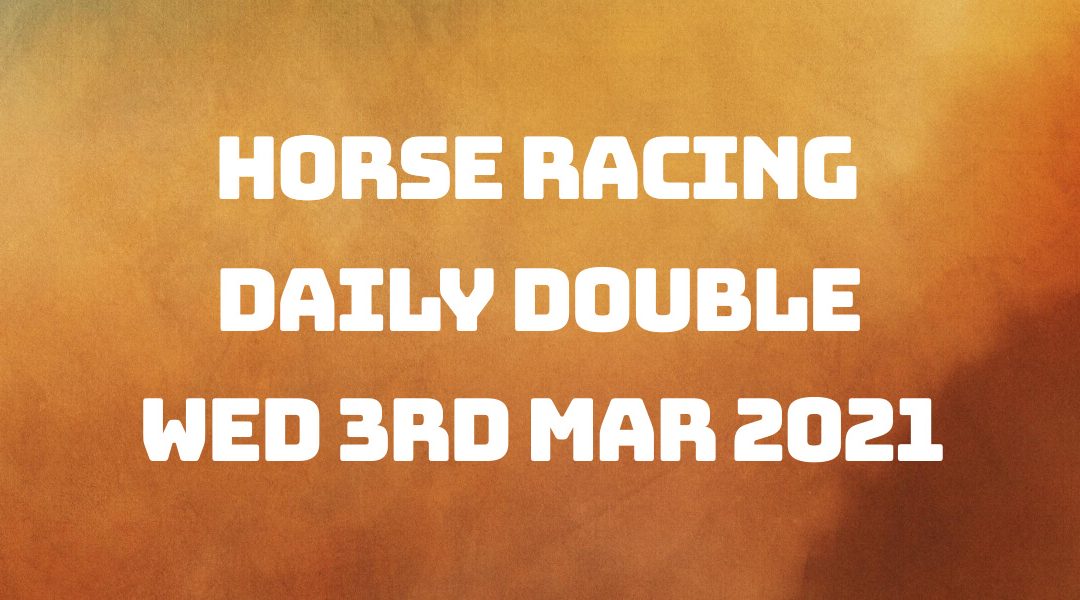 Yesterday our first selection West To The Bridge ran in the 1.00 pm race at Catterick and had to pull up, at odds of 11/10 SP at the bookies.

All was going well to start with, and by the sixth furlong, he was in front. However, his jumping looked to be a little sloppy, and he looked tired. Then at the eleventh, he tried to refuse a jump but clambered over it awkwardly. The jockey said he then had no choice but to pull the horse up on safety grounds, as he didn't feel the horse could finish the race.

Our second selection Arqalina ran in the 3.40 pm race at Leicester and landed a second-place from nine selections, at odds of 11/4 SP at the bookies.

After two lengths, he was well ahead in the lead by ten lengths. However, this distance was reduced by four out, and he looked to have used all his energy too early. He couldn't fight off competition from the winner, so no luck for our double today.

Today's first selection is Robin's Dream and runs in the 1.30 pm race at Wincanton.

The going at Wincanton today is good to soft at this national hunt jumps meeting. The race is a class four Novices' Hurdle, running over one mile and seven and a half furlongs. Fifteen are headed for the post, and the age criteria is for four-year-olds and upwards, with the youngest being a four-year-old, the eldest a seven-year-old.

Balko Saint looks to be the one to watch, placing in each of his last three outings, the most recent being at Cheltenham in a class one race. However, I think Robin's Dream can overcome his fall last time and replicate the form seen in the race before for Gary Moore.

Robin's Dream has ten tips to his name, three for Balko Saint and two for Chives.

Gary Moore has a recent forty-three per cent recent form figure currently and has had winners in six of his last forty-two races over the previous fortnight, with an additional eleven placings to add to that record. He is looking in good form for sure.

Jamie Moore is our jockey for us today in this first leg of our double, with three wins from his last twenty-two mounts during the previous fourteen days, with four more placings to add to that. Jamie generally rides for Gary in most of his races but does ride for other trainers on occasions. The two look solid when teaming up.

Robin's Dream last ran thirteen days ago and ran well in his last race before falling at Sandown on heavy ground. Before that race, he ran into a second-place finish by one and a quarter lengths in a class four at Newbury. In his debut race before that, he finished in fifth position at Plumpton at the back end of last year. So he looks to be an improving horse for sure.

Today's second selection is Get The Appeal and runs in the 4.05 pm race at Musselburgh.

The going at Musselburgh is good at this jumps meeting. The race is a class four Handicap Hurdle, running over a distance of three miles. Just five runners head to post, and the age criteria is for four-year-olds and upwards.

Dora De Janeiro looks to be the one to watch, with two second-place finishes in his last two races and a distance win to his name. However, Get The Appeal certainly gets the nod from me, winning by just over a couple of lengths here last time out.

Get The Appeal has ten tips to his name, and just the one each for Order Of Thistle, Dora De Janeiro and Henry's Joy.

Paul Nicholls is our trainer for this second race of our double and has a recent run for form figure of fifty-eight per cent. He's had nine wins from his last fifty races in the previous two weeks, with an additional eighteen placings to add to that. So generally, his horses do certainly run well.

Harry Cobden is the jockey saddling up for us, with eight wins from his last forty-nine rides. Fifteen further place positions can be added to that total over the previous two weeks. He generally rides for Paul, but now and again, another trainer will use his services. However, the two look to have found a winning combination and typically work together as a rule.

Get The Appeal last ran twenty-four days ago and has a course win already under his belt. As we have already discovered, he won his last race by just over two lengths here at Musselburgh. He previously recorded a fourth-place finishing at Taunton, then a third-place at Ludlow. Harry has only ridden Get The Appeal in the most recent of these races. With him on board again today, it certainly looks like Paul is after the win once again today.

Robin's Dream is currently priced up at 5/6 and Get The Appeal at 10/11 over at William Hill.