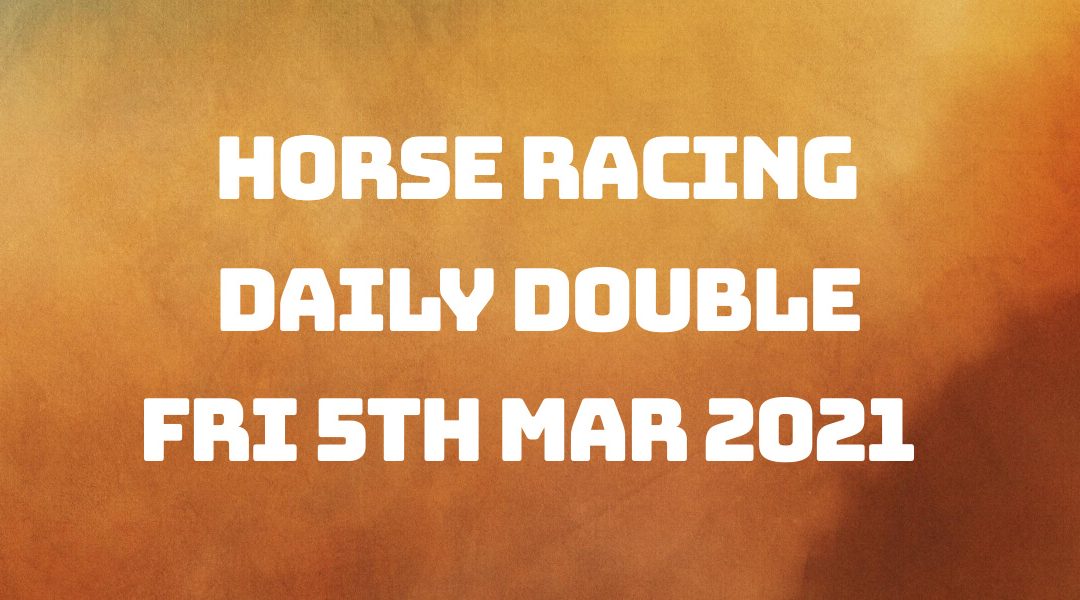 Yesterday our first selection, Travel Lightly, ran in the 4.30 pm race at Southwell and won by one and a half lengths, at odds of 9/4 SP at the bookies.

He dwelt at the start but soon recovered and tracked the leader a furlong into the race. He ran prominently and ran well during the course of the race. He was briefly outpaced with two left to run but then soon got back into it to take the win for our first race of our double.

Our second selection Jubilympics ran in the 4.42 pm race at Taunton. They finished in third position from four selections, at odds of 5/2 SP at the bookies.

He travelled strongly but was held up towards the back of the pack and then made a mistake at the twelfth-furlong mark. He nudged along and had a good chance to make a challenge for the lead. However, he made another mistake and was soon outpaced by the leading pair. Just not his day. So, unfortunately, no luck for us on the double today.

Today's first selection is One More Fleurie and runs in the 4.30 pm race at Doncaster.

The going is classed as good at this jumps meeting at Doncaster. The race is a class four Handicap Chase, running over three miles. Eight runners are competing, and the age criteria is for five-year-olds and upwards, the youngest being a seven-year-old, the eldest an eight-year-old.

Bootlegger could be the one to watch, as he has been running relatively well over this distance lately. In his most recent race, he proved that he has a lot of power in him when making up four lengths to take the win last time out.

One More Fleurie has eight tips to his name, two for Top Up The Fashion and just the one for Bootlegger.

Ian Williams is our trainer for this first leg of our double and has a recent run to form figure of fifty per cent. He's won three of his last sixteen races over the previous fourteen days and landed the place in a further three.

Charlie Todd is the jockey saddling up for us and has won three of his last sixteen mounts during the previous two weeks, placing in one other race. He's run for Ian several times recently, including winning for our selection last time out.

One Last Fleurie last ran seven days ago and won that race by half a length at Warwick in a two-mile, four-furlong race. Before that, he landed a sixth and a fifth in that order, and going way back, he hasn't been up to much, but I think that is soon to be changed with his most recent win under his belt.

Today's second selection is Twojayslad and runs in the 5.35 pm race at Doncaster.

Our second selection is again at Doncaster, over their jumps course, and is ran over good going. The race is a class three Handicap Chase run over three miles. Eight runners head to post, and the age criteria for this race is for ten-year-olds and upwards, which you don't see every day. Truly the veterans of the racing world. The youngest is a ten-year-old, the eldest a thirteen-year-old.

Twojayslad certainly looks head and shoulders above this bunch today, with two solid wins in his last two races. The potential threat could be Aubusson, who is generally up amongst the leading pack. Still, I can't see him bothering our selection too much, to be honest.

Ozzy Thomas has eight tips to his name, two for Twojayslad and Ballyhill and just the one for Lord Scoundrel.

Ian Williams is our trainer for this second leg of our double, with a nineteen per cent win strike rate over the last fourteen days. He looks set to improve this with two solid runners today and our first selection of our double.

Charlie is also on board for this selection, with his win strike rate of nineteen per cent within the last fourteen days. Charlie has ridden Twojayslad over his previous two successes, so it certainly bodes well.

Twojayslad last ran forty-three days ago and has a dual course and distance win firmly under his belt. In his last race, he won by one and a quarter lengths in class five at Ludlow. He won by half a length here at Doncaster in a class three event in the race before that. Then three races back recorded a second-place finish at Uttoxeter. So he looks to be in fine form lately.

One More Fleurie is priced at 9/4 and Twojayslad at 5/2 at William Hill currently, giving a double odds total of 11.38. Good luck, everyone.

So the double odds come in at a very tasty 15.17. Good luck, everyone.