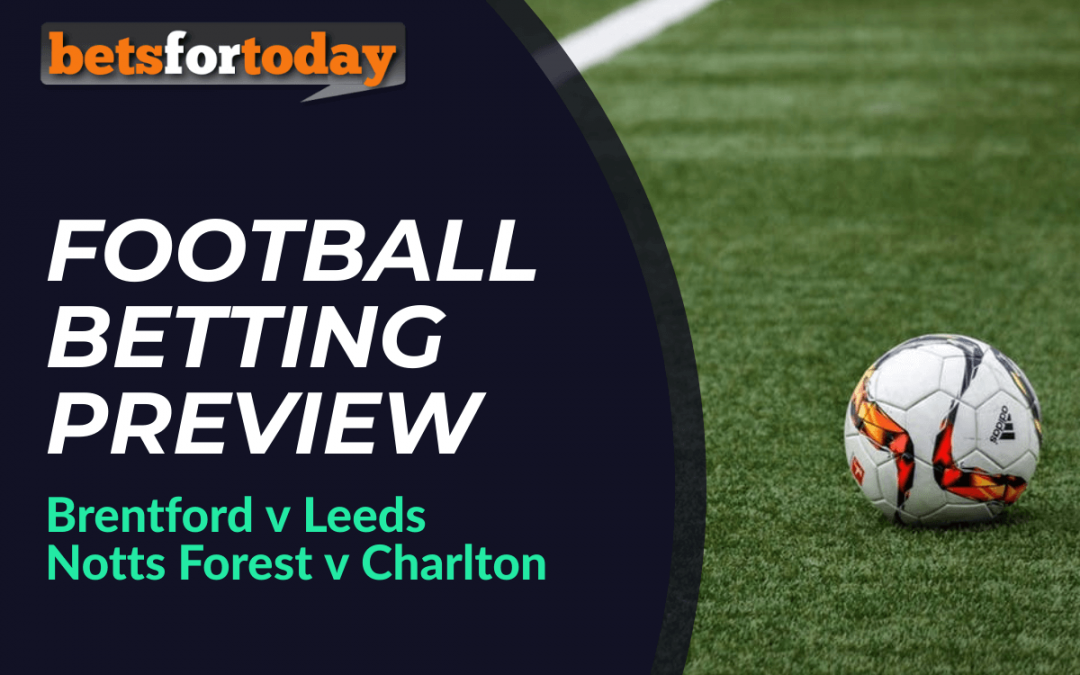 Welcome to our football tips for today.   There are lots of matches around in the Championship this evening. I'm decided to focus on Brentford v Leeds and Nottingham Forest v Charlton, with both matches kicking off at 19:45.

Will Leeds arrest their current slump or will the be replaced in the top 2 by either Notts Forest or Brentford?

Leeds' head coach Marcelo Bielsa has said that his side are not playing any worse. The run of 2 wins in 10 matches shows a different picture. Just before Christmas Leeds were 10 points clear of third place and looked certain to return to the promised land. They remain in second place, though only thanks to a superior goal difference to Fulham.

Brentford are currently fifth but will leapfrog Leeds into second if they are victorious. Their home form is enviable and bodes well for a positive result when compared with Leeds' recent results.

Brentford are looking to win 3 games in a row, which will be the first time they've managed that since October. Brentford have won 7 of their past 8 home league matches, their only reverse a 1-0 loss to Nottingham Forest on 28th Jan.

Leeds are in poor form and when analysing their recent away matches, it doesn't get much better. They've lost their last 3 away matches in all competitions and haven't won away since late December.

Leeds welcome Kalvin Phillips back now he's completed a 3 match ban but Tyler Roberts misses out due to a calf injury. Striker Jean-Kevin Augustin is on loan from RB Leipzig and could start after featuring at the weekend.

Brentford are hoping to welcome back their captain Pontus Jansson from a recent hip injury. New signings from Oxford, Fosu and Baptiste, will likely start on the bench.

As you can probably tell from the preview, I'm leaning towards Brentford. However, the bookmaker's pricing shows that it is very much on a knife-edge. I wouldn't be shocked if Leeds managed a win but I'm following the recent form here.

Nottingham Forest could move into the top 2 this evening if they win and Brentford v Leeds ends in a stalemate. They'll certainly fancy their chances of piling on the pressure on the teams above them against lowly Charlton Athletic.

Forest have won 4 of their last 5 league home games, beating promotion rivals Leeds two nil last time out. They also beat Brentford away a couple of weeks ago but conspired to lose at Birmingham.

Meanwhile, Charlton have an appalling away record. In fact, they have not won away in the league since August. Yes, you read that correctly, August! No wins in their last 12 away matches, losing 9, drawing 3 and conceding 23 goals.

Sabri Lamouchi has options to freshen up his Nottingham Forest squad for tonight's match. Lamouchi could turn to Tyler Walker after the Frenchman after he came off the bench to score in Saturday's win. New signing Nuno Da Costa is yet to make his debut.

For Charlton, Macauley Bonne is fit again and is expected to start on the bench. Aiden McGeady is still to appear for the Addicks. The January loan signing missed the defeat against Stoke on Saturday due to illness.

Given the form and overall gulf in quality between the two sides, I expect a comfortable victory for Forest. My football tips for today in this match is for Forest to be winning at half-time and full-time. Hopefully both of these selections today turn out to be winning footy tips!