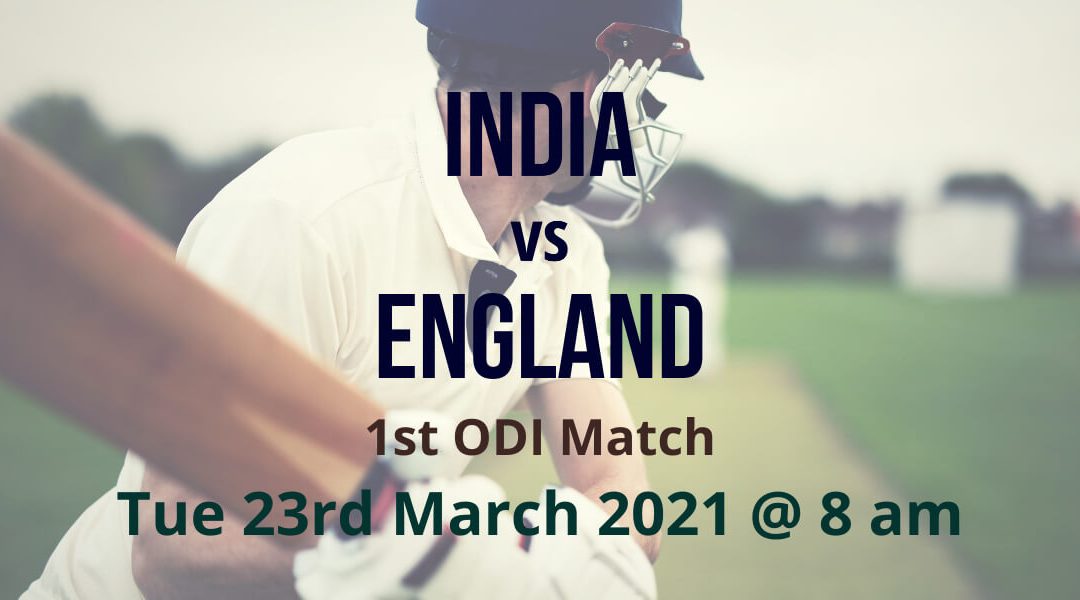 After coming out on top in the T20I series, India will want to continue their winning streak in the limited-overs series against England, starting from 23rd March in Pune.

Bowling all-rounder Krunal Pandya, batsman Suryakumar Yadav and pacer Prasidh Krishna are three uncapped players picked by selectors for the three-match series. Captain Virat Kohli will lead the side for the one-day series, while Rishabh Pant will be the first-choice keeper named in the squad.

On the other hand, Liam Livingstone, Reece Topley, Matthew Parkinson and Sam Billings have been named in England’s ODI squad. Captain Eoin Morgan will be hoping that the side can win silverware against India.

The match gets underway at 8 am on Tuesday 13rd March and live coverage is on Sky Sports.

The home side will undoubtedly be looking to stick with the same playing combination featured in the final game of the T20I series.
Expect Shikhar Dhawan to open the innings with Rohit Sharma for this three-match one-day series. The left-hander will be under the spotlight after showing poor form in the T20I series.

Swashbuckling opener Rohit Sharma looked at his absolute best in the T20I series finale. He smashed a belligerent innings to help India set up a formidable total on the board. The team management will be hoping that Sharma can continue his merry ways with the bat.

Skipper Virat Kohli is certainly in prime form with the bat after notching three half-centuries in the recently concluded T20I series against England. Given his excellent numbers at Pune, Kohli will be looking to continue his run-scoring spree in this series opener.

In the bowling department, the side will be relying on new-ball pair of Bhuvneshwar Kumar and Shardul Thakur to make early inroad in the initial Powerplay overs.

The visitors have plenty of match-winners at their disposal to push India in this one-day series. Captain Eoin Morgan will need to lead from the front and deliver something special with the bat.

In the batting department, the side will be relying on explosive pair of Jason Roy and Jonny Bairstow to get them off to flying starts. Experienced middle-order trio of Eoin Morgan, Ben Stokes and Jos Buttler will need to pile on the runs for the side and post a mammoth score on the board.

In the bowling department, Jofra Archer will not be available for the one-day series, so Sam Curran might come into the playing XI. Mark Wood, Adil Rashid and Moeen Ali will be prominent bowling options for the side for this opening counter.

Eoin Morgan is one of the bankable performers for England in white-ball cricket. The team management will hope that Morgan can find his form with the bat and deliver a notable score. The 34-year old has the ability to produce match-winning performances for England in one-day cricket.

With the T20I series turning out to be a closely contested one, the limited-overs series is expected to go down to the wire.

With the likes of Virat Kohli and Rohit Sharma showing imperious form with the bat, and pacer Bhuvneshwar Kumar finding his mojo with the new-ball, India will be looking to draw first blood in this series.

On the other hand, experienced players will have to step up and raise their game if England aims to overcome India in this contest.

Expect India to register a close win over England in the opening game of the ODI series.