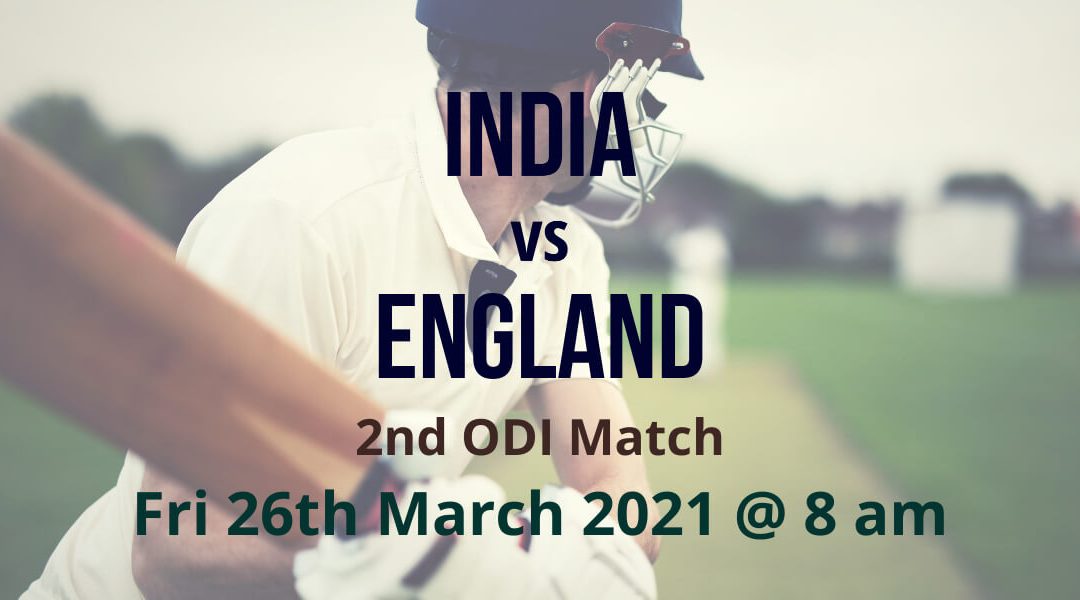 England will be looking to put on a much better show to level the ODI series when they face hosts India in the second ODI at Pune on Friday.

In the first ODI, India produced a spectacular comeback. They registered a 66-run win over England courtesy of excellent bowling performances from Shardul Thakur, Prasidh Krishna and Bhuvneshwar Kumar.

On the other hand, England suffered a monumental collapse after getting off to an excellent start, courtesy of partnership from Jason Roy and Jonny Bairstow. World Champions will be looking to bounce back from this defeat and level the ODI series on Friday.

The match gets underway at 8 am on Friday 26th March and live coverage is on Sky Sports.

Going into the ODI series, there were concerns over the form of Shikhar Dhawan and Lokesh Rahul. They failed to get runs in the T20I series. In the first game, Dhawan smashed a brilliant 98 to lay down foundations for Lokesh Rahul and Krunal Pandya's to go berserk in the innings' final ten overs.

The team management will be looking towards experienced players-Rohit Sharma, Shikhar Dhawan and Virat Kohli to make notable contributions in this second game.

However, captain Virat Kohli and coach Ravi Shastri will hope that middle-order batsman Lokesh Rahul, who scored a brilliant 62 not out in the first ODI, will continue his good form in this contest as well.
In the bowling department, looking at the pitch of conditions, the role of pace trio of Bhuvneshwar Kumar, Shardul Thakur and Prasidh Krishna will need to provide crucial breakthroughs in the Powerplay overs.

It will also be interesting to see if Kohli will show faith with left-arm Chinaman Kuldeep Yadav and give him any chances to produce some magic in this second match.

For England, the key will be put in a disciplined batting performance in this second game and level the three-match ODI series.
The team management will be hoping that skipper Eoin Morgan can find form with the bat in the batting department. More will be expected from middle-order batsman Ben Stokes who had a disappointing outing in the last match.

For England, Jonny Bairstow delivered a magnificent innings in the series opener. He smashed a belligerent 94 off 66 balls with the help of six boundaries and seven sixes. Besides, Jason Roy and Moeen Ali showed decent form and produced scores of 46 and 30, respectively.

In the bowling department, the focus will be on Mark Wood and Sam Curran's pace duo to make early inroads with the new-ball. Adil Rashid, Moeen Ali and Ben Stokes are other prominent options for the side for this game.

The pitch is expected to be excellent for batting, whereas there are no chances of rain throughout the day which means we will have a complete game on Friday.

England's Talismanic all-rounder, Ben Stokes, will be looking to make a strong statement with the bat. After perishing for a low score in the first ODI, Stokes will be keen to deliver something special for England. Given his past record, there is no doubt that Stokes will be one player to watch out for in this 2nd ODI.

With Shikhar Dhawan and Lokesh Rahul finding form with the bat in the ODI series and captain Virat Kohli delivering another half-century, India seems unstoppable at the moment after their victory in the series opener.
The home side have the upper hand in the bowling department, with spearhead Bhuvneshwar Kumar producing another excellent performance.

On the other hand, England will have to raise their overall game in a bid to level the series.
Expect India to eke out a close win over England in the 2nd ODI.