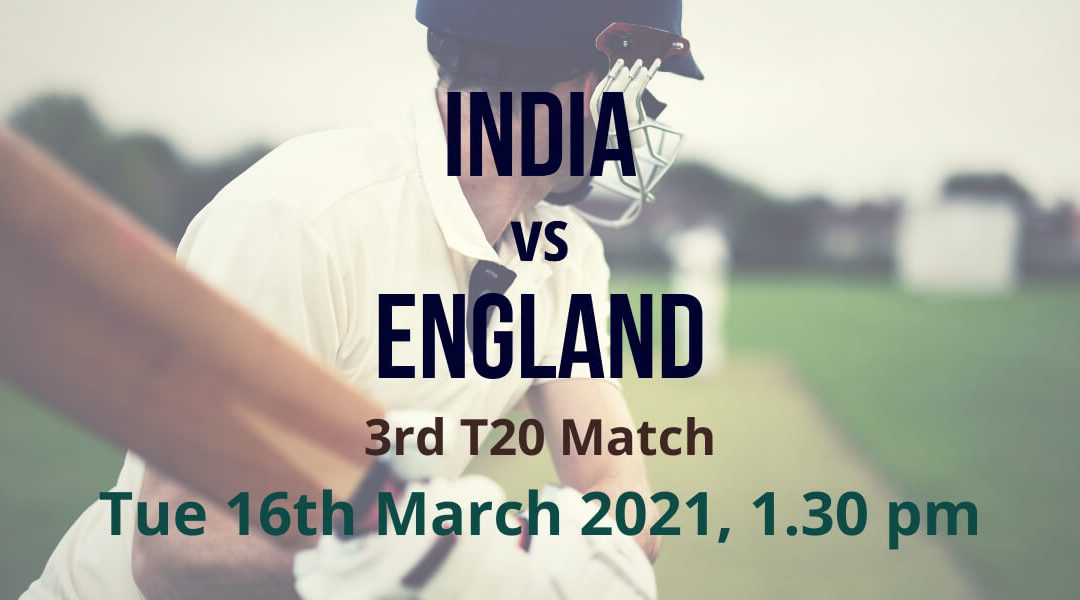 Host India and England will battle it out in the third game of the T20I series to be played at Ahmedabad on Tuesday.

In the previous game, India delivered an emphatic win over England, courtesy of splendid performances from Washington Sundar, Ishan Kishan and Virat Kohli. With the series evenly poised 1-1, India will be looking to deliver another clinical performance in this fixture.

On the other hand, England will be looking to improve their bowling performance in this fixture. Captain Eoin Morgan will hope that experienced players can deliver the goods with bat and ball in this contest.

The match gets underway at 1.30 pm on Tuesday 16th March and live coverage is on Sky Sports.

The home side will go with the same playing XI featured in the second game of the T20I series.

After India won the toss and elected to bowl, the bowlers produced better line and lengths against England's star-studded batting lineup. Pacer Bhuvneshwar Kumar set the tone for India and dismissed Jos Buttler with a first-ball duck.

In the batting department, Lokesh Rahul's form continued as he perished for a duck. Debutant Ishan Kishan and Captain Virat Kohli came together and put on a 94-run partnership for the second wicket.

The big positive for India from the previous game was captain Virat Kohli finding form with the bat. He looked fluent in his innings and finished the innings with the top-score of 73 runs off 49 balls with the help of five fours and three sixes. He will be looking to continue his excellent form for India in the next couple of matches.

The visitors might shuffle their batting order to produce better results in the next couple of games. Despite losing the toss, England managed to post 164 runs for the loss of six wickets in their 20 overs.

For England, Jason Roy continued his excellent form with the bat and finished the innings with the top-score of 49 runs off 35 balls. The likes of Dawid Malan, Jonny Bairstow, Ben Stokes and Eoin Morgan also chipped in with crucial scores in the previous game.

The team management will hope that Jos Buttler can get back amongst the runs after perishing for a duck in the 2nd T20I. In the bowling department, the side will rely on Jofra Archer, Adil Rashid, and Chris Jordan.

Wicket-keeper Jos Buttler is one of the explosive players in the T20 format. The team management will be hoping that Buttler can deliver something special with the bat for England. The 30-year old can change the complexion of the game in the space of a few overs.

The first two T20Is ended up being pretty one-sided contests; both the teams will be looking to produce their best cricket in this fixture. With Virat Kohli finding form with the bat and Bhuvneshwar Kumar producing a splendid new-ball performance, the hosts will be keen to bring their A-game to the table. On the other hand, England will have to bowl exceedingly well to upstage India in this game.

Expect India to achieve a comfortable win over England in the third game of the T20I series.