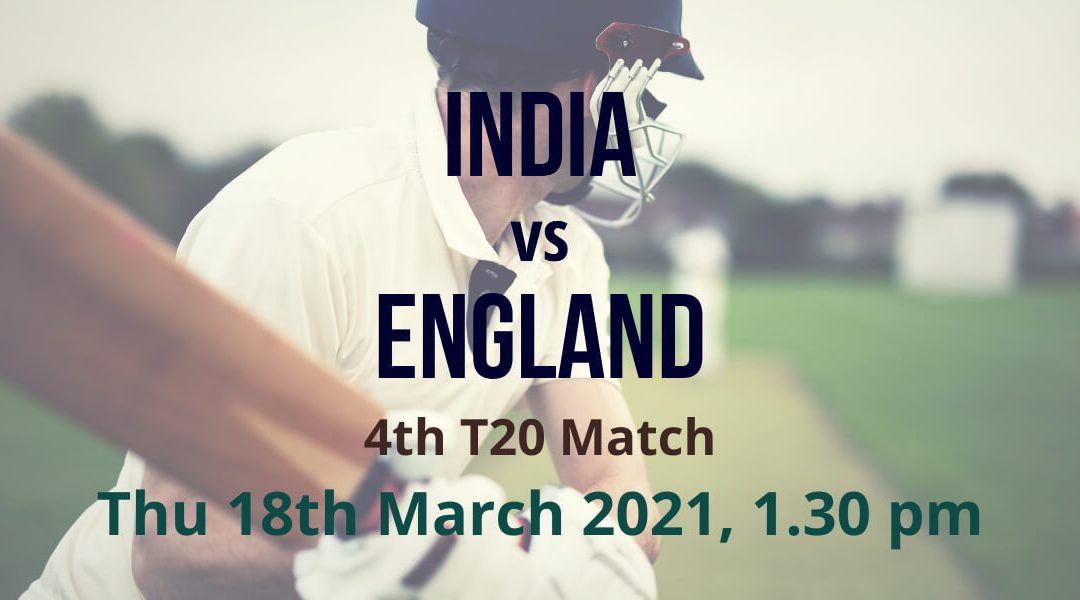 India will be looking to stay alive in the T20I series when they take on England in the fourth game at Ahmedabad on Thursday.

In the previous game, the home side lost too many wickets in the initial Powerplay overs. Lack of runs from the openers will be a cause of concern for India going into this game. Captain Virat Kohli will be hoping that the side can make a strong comeback in this fixture.

On the other hand, England registered a comprehensive win over India, courtesy of excellent performances from Jos Buttler, Mark Wood and Jonny Bairstow. With this result, England have taken a 2-1 lead in the five-match T20I series.

The match gets underway at 1.30 pm on Thursday 18th March and live coverage is on Sky Sports.

The home side might bring in Deepak Chahar and Axar Patel instead of Shardul Thakur and Yuzvendra Chahal for this game. Lokesh Rahul is expected to retain his place in the final XI despite perishing for a duck in the previous game.

Playing his first game, Rohit Sharma failed to capitalize on his good start and perished after scoring 15 runs off 17 balls with the help of two boundaries. Indian captain Virat Kohli showed his class with the bat once again and led the fightback for the side with a 40-run partnership with Rishabh Pant.

Virat Kohli anchored the whole innings and smashed 77 not out off 46 balls with the help of eight boundaries and four sixes. He was well supported by Hardik Pandya and Rishabh Pant, who produced scores of 17 and 25, respectively.

Bhuvneshwar Kumar bowled well but failed to provide any breakthroughs. Off-spinner Washington Sundar was the pick of the bowlers and finished with decent figures of 1 for 26 in his four overs. Shardul Thakur and Yuzvendra Chahal conceded close to ten runs an over in this fixture.

The visitors made a strong comeback in the third game of the T20I series. England Skipper Eoin Morgan will be pleased with his side’s performance and hope that they can maintain their standards with bat and ball in this fixture.

The inclusion of Mark Wood certainly added potency to England’s pace attack for this game. He dismissed the opening pair of Lokesh Rahul and Rohit Sharma and put England on top.
Mark Wood was the standout bowler in the previous game and claimed 3 for 31 in his four overs for England. Besides Wood, Chris Jordan made a splendid comeback and finished with 2 for 35 in his four-over spell.

Chasing 157 runs for victory, Jason Roy perished quickly after smashing two boundaries in the initial overs. Before this game, Buttler had done much with the bat in the T2OI series. Wicket-keeper batsman took his time at the crease and smashed a blistering 83 not out off 52 balls with the help of five fours and four sixes. He was well supported by Jonny Bairstow and Dawid Malan, who chipped in with scores of 40 not out and 18, respectively.

Pugnacious Rohit Sharma will be looking to deliver absolute best with the bat for India in this must-win game. The opener certainly has the ability to raise his game and deliver the goods in big matches.

Given their excellent performances, England will start as favourites to win this fourth game of the T20I series. Mark Wood and Jofra Archer have certainly been phenomenal in this T20I series. With Jos Buttler finding form with the bat, England will be looking to dominate the proceedings.
Expect England to register a thumping win over India and clinch the T20I series.