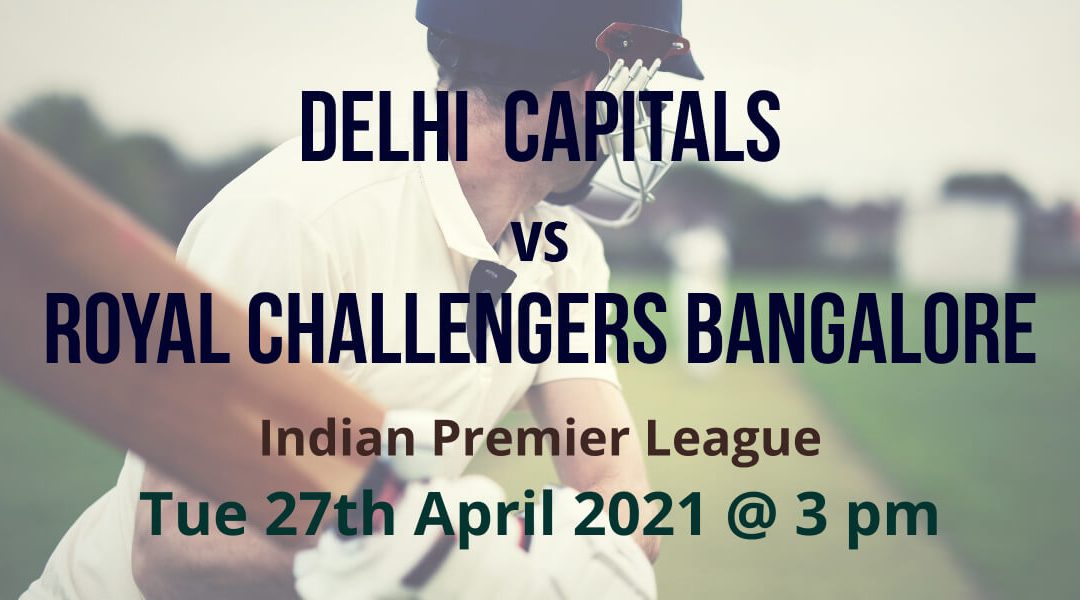 Delhi Capitals and Royal Challengers Bangalore will lock horns in the 22nd match of the 2021 Indian Premier League at Narendra Modi Cricket Stadium in Ahmedabad on Tuesday.

Delhi Capitals beat Sunrisers Hyderabad via super-over in the previous game played on Sunday. Captain Rishabh Pant will hope that the side can maintain their disciplines with bat and ball.

On the other hand, Royal Challengers were completely outclassed by Chennai Super Kings in three departments. The franchise suffered their first loss of the competition. Captain Virat Kohli will be hoping that the side can raise their overall game with bat and ball against Delhi Capitals.

The match gets underway at 3 pm on Tuesday 27th April and live coverage is on Sky Sports.

They will be relying on batsmen Prithvi Shaw, Shikhar Dhawan and Rishabh Pant to deliver the bulk of the runs.

In the previous encounter, rookie opener Prithvi Shaw was the standout performer for the side and completed the innings with the top score of 53 off 39 balls with the help of seven boundaries and one six. He will want to continue his excellent form with the bat against Sunrisers Hyderabad.

Veteran opener Shikhar Dhawan has been an in-form player for Delhi Capitals in the batting department. He is currently leading the batting charts in the competition. The left-hander once again got the side off to a good start and scored 28 runs off 26 balls.

Wicket-keeper Rishabh Pant, Steven Smith and Shimron Hetymer will need to contribute crucial scores with the bat in this contest. Smith made a decent contribution for Delhi in the previous game and scored 34 runs off 25 balls.

Captain Rishabh Pant delivered another crucial inning for Delhi Capitals. The left-hander scored a fluent 37 runs with the help of four fours and one six.

The side will be relying on bowlers Axar Patel, Amit Mishra and Avesh Khan to deliver crucial breakthroughs.

In the previous game, left-arm spinner Axar Patel and pacer Avesh Khan bowled well and picked up five wickets. In his first game for Delhi, Axar Patel claimed two wickets to his name and conceded 26 runs from his four overs.

Pacer Kagiso Rabada has failed to create an impact with the new-ball so far this season. He will be looking to find form with the ball in hand against Royal Challengers Bangalore.

RCB will endeavour to get back to winning ways after suffering a comprehensive defeat in the previous match.

The team will be depending on captain Virat Kohli and opener Devdutt Padikkal to provide the platform for AB De Villiers and Glenn Maxwell to go berserk with the bat in the final ten overs of the innings.

Australia all-rounder Glenn Maxwell so far is RCB’s highest run-getter in the tournament with 198 runs in nine matches at an average of 49.50, whereas Devdutt Padikkal has managed to score 171 runs at an average of 57.00

Devdutt Padikkal scored 34 runs off 15 balls in the previous match, whereas Glenn Maxwell chipped in with 22 runs off 15 balls. The duo failed to capitalize on their excellent start and will be looking to deliver notable scores against Delhi Capitals.

In the bowling department, the team is heavily dependent on the pace trio of Harshal Patel, Navdeep Saini and Harshal Patel to deliver wickets with new-ball. Currently, medium-pacer Harshal Patel is leading the bowling charts in the competition with 15 scalps to his name.

Prithvi Shaw led the way with the bat in the previous game against Sunrisers Hyderabad. He produced a crucial half-century to see Delhi beat Sunrisers via super-over and register their fourth win of the season. He will once again be the player to watch out for Delhi Capitals in this game.

Based on current form, Royal Challengers Bangalore will be confident of beating Delhi Capitals in this fixture. With the likes of Virat Kohli, Devdutt Padikkal and Glenn Maxwell in excellent touch with the bat, RCB will be looking to put in dominant batting performance.