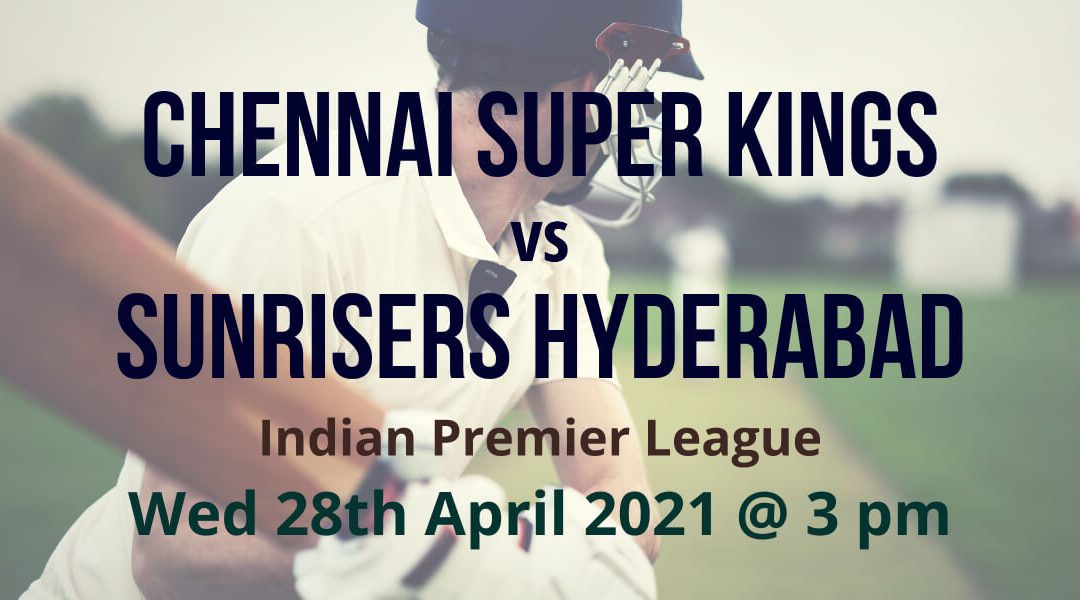 Table-toppers Chennai will be eager to continue the momentum forward when they face Hyderabad in the 23rd match of the IPL at Arun Jaitley Stadium in Delhi on Wednesday.

Chennai Super Kings managed to deliver a pitch-perfect performance to beat Royal Challengers Bangalore in their previous game on Sunday. Captain Mahendra Singh Dhoni will hope that the side can continue their good form with the bat and ball in this fixture.

On the other hand, Sunrisers will rue the fact that they should have won their previous game against Delhi Capitals. Captain David Warner will need to lead from the front for Kuwait to end their losing streak in the competition.

The match gets underway at 3 pm on Wednesday 28th April and live coverage is on Sky Sports.

MS Dhoni-led unit will be high on confidence after registering an impressive 69-run win against Royal Challengers Bangalore in their previous match on Sunday, courtesy Ravindra Jadeja all-round heroics with bat and ball.

For Chennai, Ravindra Jadeja produced a match-winning performance with the bat against Royal Challengers Bangalore. He smashed a belligerent 62 not out with the help of four boundaries and five sixes. He stitched crucial partnerships with Ambati Rayudu and MS Dhoni to help Chennai post a daunting total on the board.

A middle-order comprised of Suresh Raina, Ambati Rayudu and wicket-keeper MS Dhoni hasn't done much this season. The experienced trio will be looking to contribute with the bat in this contest.

The side will be relying on bowlers Deepak Chahar, Imran Tahir and Ravindra Jadeja to provide crucial breakthroughs. Pacer Deepak Chahar has topped the bowling charts for the side so far in the competition with eight wickets at an average of 7.94. Sam Curran, Shardul Thakur and Dwayne Bravo are other bowling options for the side for this game.

Once again, the batting lineup capitulated badly in the chase to see Sunrisers suffer their fourth defeat in the tournament. The side will have to correct their middle-order woes to end their losing streak in the competition.

The previous game's highlight was Kane Williamson showing excellent form with the bat on a surface that had variable bounce.

However, the real cause of concern for Sunrisers in the match will be their frail middle-order. They are constantly finding it hard to score runs or to produce much-needed partnerships.

The arrival of young pacer Siddharth Kaul was a big positive for the team in the match against Delhi; he claimed 2 for 31 in his four overs.

Considering the traditional pitch at Arun Jaitley Stadium in Delhi, the spinners will play a vital role in the match's outcome.

Faf du Plessis has been in sensational form with the bat for Chennai this season. He has been the go-to man for Chennai in the batting department, topping the batting charts so far in this year's competition. He will be expected to continue his merry ways with the bat against Sunrisers Hyderabad.

Based on the current form, Chennai will be outright favourites to win their game against Sunrisers Hyderabad.

With Faf du Plessis, Moeen Ali and Ravindra Jadeja putting in match-winning performances with the bat, Chennai Super Kings will be looking for another clinical batting performance.

On the other hand, Sunrisers Hyderabad will need to sort their middle-order problems to get a positive result.

It will undoubtedly be a one-sided affair, with Chennai Super Kings cruising to a comprehensive win at Delhi.