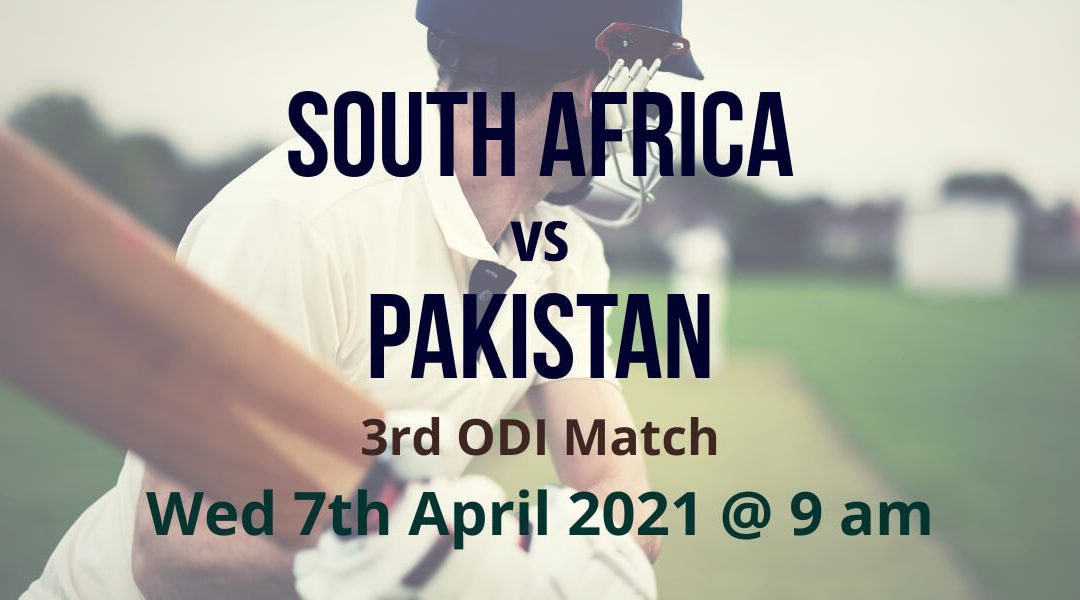 Host South Africa and Pakistan will battle it out in the third and final game of the one-day series to be played at SuperSport Park in Centurion on Wednesday.

In the previous game, South Africa registered a 17-run win over Pakistan, courtesy of excellent performances from Quinton de Kock, Rassie van der Dussen and Temba Bavuma. The home side will be looking to maintain their standards with bat and ball in this series decider.

Pakistan once again put in another decent performance despite losing the Pink ODI at Wanderers. The visitors might make one or two changes to their playing XI for this final game.

The match gets underway at 9 am on Wednesday 7th April and live coverage is on Sky Sports.

The home side might bring in spinner Keshav Maharaj to provide stability and control in the middle-overs of the innings. Left-arm Chinaman, Tabraiz Shamsi, might be dropped from the XI after conceding many runs in the Pink ODI game played at The Wanderers.

With Lungi Ngidi, Anrich Nortje, Kagiso Rabada, Quinton de Kock and David Miller leaving for IPL, it will be challenging to fill the void left by senior players. Janneman Malan, Beuran Hendricks will make their return to the playing XI. At the same time, wicket-keeper Kyle Verreynne and Sisanda Magala are expected to make their debuts for South Africa.

After failing to capitalize on his strong start, Aiden Markam will be determined to produce big innings in this series finale. Markram's partner, Quinton de Kock, showed excellent form with the bat and smashed 80 runs off 86 balls with the help of ten boundaries and one six.

After losing the first ODI, captain Temba Bavuma needed to lead from the front with the bat and help South Africa square the series. He fell eight runs of his maiden ton in limited-overs cricket. Despite all the criticisms, Rassie van der Dussen continues to be South Africa's most consistent player in white-ball cricket. He showed his versatility with the bat and smashed a quick-fire half-century with the help of six boundaries and four sixes.

Designated finisher for South Africa, David Miller, has certainly managed to find a purple patch with the bat. The left-hander smashed his second half-century in consecutive matches to help South Africa post a mammoth total on the board. With Miller not available for the final ODI, uncapped wicket-keeper Kyle Verreynne and Wiann Mulder will be expected to slot into South Africa's middle-order.

In the bowling department, the likes of Magala, Maharaj and Hendricks will replace Lungi Ngidi, Kagiso Rabada and Tabraiz Shamsi for this series decider.

With South Africa losing their key players to IPL, the visitors will have an excellent opportunity to win their second ODI series in South Africa. Captain Babar Azam will be looking for a collective effort to win the series against South Africa.

The big positive from the pink-ball ODI was belligerent innings produced by Fakhar Zaman for Pakistan. Left-hander certainly captured the headlines around the world after smashing 193 runs off 155 balls.

Besides Fakhar Zaman, Babar Azam scored 31 runs off 33 balls with the help of six fours. The visitors will depend heavily on their top-order trio of Imam-ul-Haq, Fakhar Zaman and Babar Azam to help Pakistan get off to a great start and post a competitive score in their full quota of overs.

The home side might bring in Haider Ali to replace Asif Ali, who hasn't done much with the bat this series.

Pacer Haris Rauf was the pick of the bowlers and claimed 3 for 54 in his ten overs. Besides Rauf, Shaheen Shah Afridi, Faheem Ashraf and Mohammad Hasnain claimed one wicket apiece. Usman Qadir could make his limited-overs debut as Shadab Khan looked completely ineffective as slow bowler in the middle overs of the innings.

The stage is undoubtedly set for Pakistan captain, Babar Azam, to produce another batting masterclass in the series decider. The premier batsman will be determined to put in a big score and help Pakistan register a famous ODI series win in South Africa.

Based on the current form, Pakistan will fancy their chances of beating South Africa in this series decider. With Fakhar Zaman, Babar Azam and Imam-ul-Haq in play, expect Pakistan to put in a dominant batting performance in this finale.
On the other hand, South Africa will need to develop better plans to upstage Pakistan in this contest. With their five premier players unavailable, the home side might struggle to compete with Pakistan at Centurion.