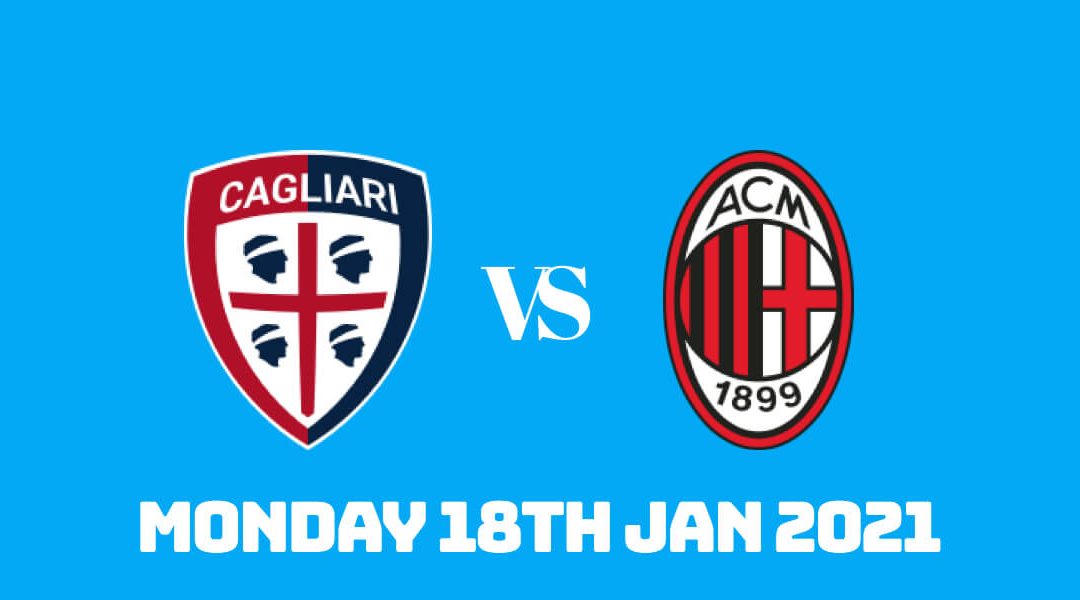 Table-toppers AC Milan travel to relegation fodder Cagliari in the final fixture of Serie A’s matchday 18. Stefano Pioli’s side bounced back from their first league defeat with wins against Torino both in Serie A and Coppa Italia. AC Milan only dropped two points in their travels this season. Cagliari’s last win came in early November as they only collected four points from their last ten games.

In the latest round of molecular swab carried out at Milan, Hakan Calhanoglu and Theo Hernandez tested positive for COVID-19. Both have been key to Milan’s surprising title charge.

The Turkish midfielder struggled for a while before regaining his form tremendously since the lockdown. Theo Hernandez scored four and assisted five more in all competitions from a fullback position as the former Atletico Madrid prodigy is currently one of the best players in the world in his position.

The news came when Ante Rebic is expected to finally return to the side after missing the last four games because of the pandemic. Milan had a surprisingly tough cup outing against Torino after they defeated the same opposition three days earlier. After losing to Juventus the previous midweek at San Siro, Milan’s next two games were also home ties against a Turin-based club. They extended their lead at Serie A’s summit with a straightforward win against Torino but it went down to penalty shootouts in the cup. It was nothing like the memorable Europa League qualifiers shootout against Rio Ave, however, as Milan progressed with a straightforward 5-4 win. Two days later, Milan signed Soualiho Meite from the same club in an initial loan deal.

The match kicks off at 19:45 and the entire match is streaming live on Bet365

Former Belgian international Radja Nainggolan returns to Cagliari for the third time. It’d be another loan deal after he once again struggled for playing minutes in Antonio Conte’s Inter Milan. Ghanian midfielder Alfred Duncan also spend a similar first half of the season at Fiorentina as he now joins Cagliari on loan with an option to buy.

Eusebio De Francesco’s side is currently on a four-game losing streak in Serie A. While the first two defeats came against Europe-bound Roma and Napoli, losing to the fellow bottom half of table teams Benevento and Fiorentina left them within a point of the relegation zone.

The midweek Cup fixture at Atalanta was far more promising for De Francesco’s troops. Atalanta dominated the play for large spells but Cagliari were superb since conceding the third goal in the 3-1 defeat.

Star player Joao Pedro was an inspiration after coming off the bench while Ricardo Sottil came whiskers away from setting up nervy final minutes. Sottil scored a sensational goal on the night after a quick throw by goalkeeper Guglielmo Vicario.

Since the turn of the century, Cagliari only managed to beat Milan once. Joao Pedro scored the opening goal in the occasion when Fabio Pisacane netted the winner in injury-time back in 2017. The Brazilian also scored Cagliari’s last goal against Milan when the sides played out a 1-1 draw in 2018. Milan won their last three games against Cagliari with a total score of 8-0

One of the key signings of Cagliari from the previous season, Marko Rog is out for the rest of the season due to a cruciate ligament. COVID-19 also caused a selection headache for De Francesco as centrebacks Andrea Carboni and Ragnar Klavan are recovering from the virus. Uruguayan midfielder Nahitan Nandez is suspended after his red card in the narrow defeat against Fiorentina.

Milan welcomed the return of Zlatan Ibrahimovic last week as the Swede star played few minutes in the league and the first half of the cup tie against Torino. With Rafael Leao suspended, Zlatan is expected to start against Cagliari. Missing Calhanoglu and Theo Hernandez for the coming weeks would be a huge blow for Pioli’s side, however. Rade Krunic is also in quarantine but combative midfielder Ismael Bennacer and Belgian wizard Alexis Saelemaekers are back in team training.

Milan to stay at the summit?

After failing to break a much-changed Torino side in midweek, Milan would hope for a more comfortable night on Monday. Apart from draws against Genoa and Lille, Pioli’s side impressively won all their away games this season.