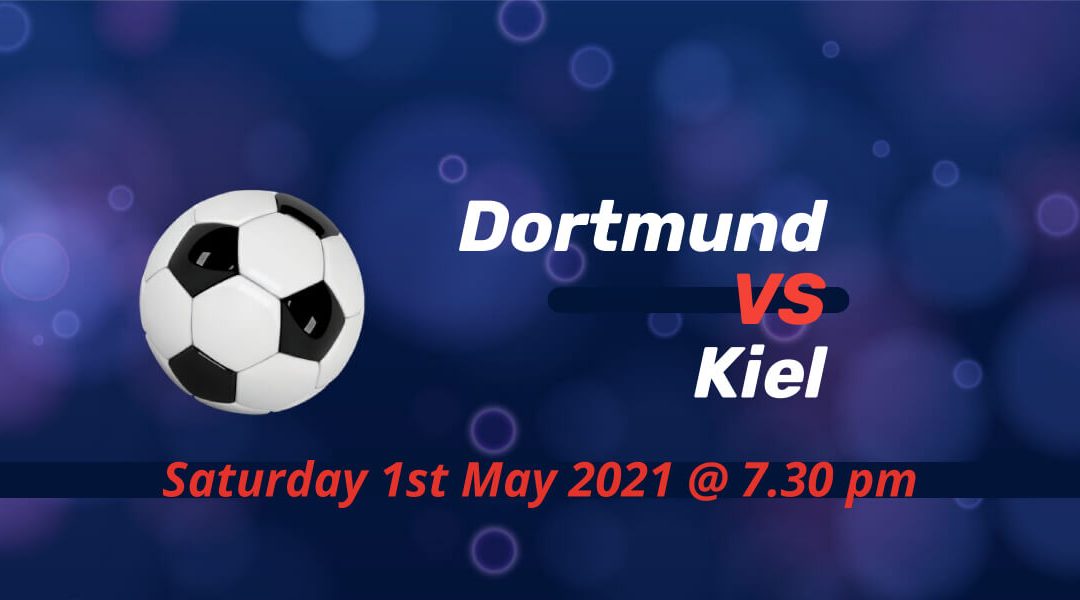 Borussia Dortmund are 90 minutes away from reaching DFB Pokal final as they face second-tier club Holstein Kiel on Saturday. Edin Terzic has a chance to prove his qualities for potential suitors with everyone scrapping for replacement in Germany’s merry-go-round of coaches. Kiel are in the midst of a fight for promotion to Bundesliga.

Dortmund eye to end a mediocre season with a title

The recent weeks have seen the potential of Dortmund’s squad, but their overall season was poor. They’re already defeated in 10 games in the Bundesliga this term. This leaves them to fight for a Champions League spot in the final three rounds of the league.

It looked like that realization is out of their hand at halftime in Stuttgart. Still, they managed to put their act together ever since after Ansgar Knauff came up with the winning goal from Mercedes Benz Arena.

Dortmund won each of their last four games in Bundesliga and put on an excellent performance in both legs against Champions League favourites Manchester City. They’re now only a point behind Eintracht Frankfurt. At the same time, Wolfsburg’s lead over them dropped to two points after Erling Haaland’s double helped them to a three-point from the trip to Volkswagen Arena.

The match kicks off at 19:30 on Saturday 1st May 2021, and the entire game will be available on YouTube.

Kiel are in a battle for promotion and cup upset

Kiel fight in both league and cup in what could prove to be one of the most memorable seasons in the club’s history. They knocked out giants Bayern Munich from Pokal as they remained the last team to survive from lower-division sides in a cup season that was so unpredictable.

They’re also in contention for promotion to Bundesliga. With Hamburg keep bottling up in Bundesliga 2. and Fortuna Dusseldorf struggling for consistency, Kiel get another chance to push for promotion.

Bochum and Greuther Furth look to consolidate their spot in the top two while the race for a promotion playoff currently includes as many as six clubs. Kiel lost to Wolfsburg in the relegation/promotion playoff back in 2018.

A second meeting between Dortmund and Kiel

The two clubs only met once before Saturday’s fixture. That was also in DFB Pokal when Dortmund reached the semifinal in 2011-2012 with a 4-0 victory. They then wrapped up the double thanks to another comfortable win in the final against Bayern. Defenders Mats Hummels, Marcel Schmelzer and Lukasz Piszczek are the only players from that time who are still on Dortmund’s roster.

Schmelzer is still out with an injury, but Piszczek returned to the starting eleven in the last two games with the side keeping a clean sheet on both occasions. Hummels will be back to the side after missing his first game of the season at Wolfsburg due to suspension. However, Mahmoud Dahoud is suspended for this one after his red card in the previous round against his former club Borussia Monchengladbach. Axel Witsel, Youssoufa Moukoko and Dan-Axel Zagadou will only return in the new season.

Stefan Thesker is out of the game due to an Achilles tendon rupture. Ioannis Gelios is still in quarantine for the side with three games in hand in the Bundesliga 2. because of a COVID-19 outbreak.

Dortmund to reach cup final for the first time since 2017?

Ousmane Dembele and Pierre Emerick Aubameyang were the stars when Dortmund beat Eintracht Frankfurt in the 2016-17 DFB Pokal final. They couldn’t go far since then in the competition, but they can end this disappointing season on a high note. Kiel would prioritize on a first Bundesliga promotion, but they will give their all to knock out another giant.