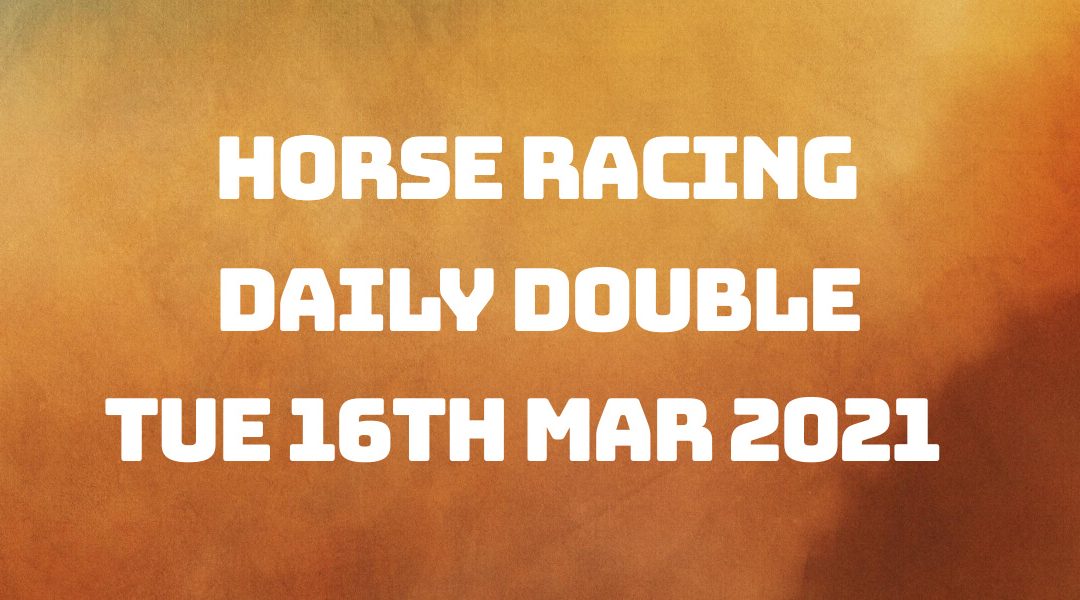 Yesterday our first selection Powerstown Park ran in the 4.25 pm race at Plumpton and won an impressive eleven lengths, at odds of 4/11 SP at the bookies.

He tracked the leader early on and ran well after just three furlongs, then took the lead with two left to run. Nudged along and went clear by some distance to land this first leg of our double.

Our second selection Starczewski ran in the 6.50 pm race at Wolverhampton and won by half a length, at odds of evens at the bookies.

He didn't start too well and was held up in the last position. However, he pushed along and chased the leader at the home turn, edged left and took the win in the dying stages.

A good win for our double yesterday; it would have paid more when taking early prices, too—an excellent start to the week.

Today's first selection is Sergeant Major and runs in the 5.15 pm race at Newcastle.

The going is classed as standard to slow here at Newcastle's Tapeta all-weather course. The race is a class five Handicap, running over one mile and four and a half furlongs. Just four runners are headed to post, and the age criteria is for three-year-olds only.

Silver Shade looks to be one who could pose a real threat, beaten by just over one length at Lingfield last time out, and surely eager to go one better for Mark Johnson today. However, Sergeant Major ran very well for Richard Hannon last time out, winning by just over a length at Chelmsford.

Sergeant Major has six tips to his name, Silver Shade five and two for Myrtle Maclagan.

Richard Hannon has a recent run for form figure of seventy-four per cent, and won four of his last twenty-seven races over the last fortnight. In addition, he's also had five placings within the same period

Jamie Spencer is saddling up for us and won three of his last six races over the previous fourteen days, with placings in one of these two. So not had too many races, but when he has, he's performed well. He's not ridden for Richard lately, having run only for David Simcock, so an interesting booking today. He's also never ridden Sergeant Major before.

Sergeant Major last ran twelve days ago. He won by one and a quarter lengths in a class six race at Chelmsford, running over one mile and two furlongs in his last race. Prior to that, he managed a fourth-place finish when running in a class six race at Lingfield, over one mile. This followed a fifty-two-day break. He made a sixth-place finish in a class five race at Kempton over seven furlongs on his race before the break. It looks like his results have improved with an increase in distance. With an additional two and a half furlongs longer, it will be interesting to see how he performs today.

Today's second selection is Streak Lightning and runs in the 6.45 pm race at Newcastle.

Our second leg of our double also runs at Newcastle over their Tapeta all-weather course. The race is a class four Handicap, running over seven furlongs. Five runners are headed to the post. The age criteria are four-year-olds and upwards; all horses are four-year-olds except one five-year-old.

Greek Kodiac looks to have something about him and could be the one who is challenging in the final stages of today's race. He's been running there or thereabouts lately, and more importantly, is proven at today's course and distance. However, Streak Lightning is also a proven course and distance winner and won last time out.

Streak Lightning has four tips to his name, two each for Duesenberg and Atheeb and just the one for Greek Kodiac.

Mark Johnson is our trainer and has a recent run to form figure of fifty-six per cent. He's had six winners in his last twenty-eight races over the last two weeks and had an additional four landed a place.

P J McDonald is our jockey and won two of his last thirty-three races and placed in six over the previous two weeks. He's not ridden for Mark lately and never ridden Streak Lightning, so it is quite an intriguing booking for Mark.

Streak Lightning last raced fifty-two days ago, and as we have already discovered, is a dual and course distance winner. In his last races, he won by one and a half lengths in a class four race at Newcastle, over seven furlongs, and took the tenth position in a class four race at Wolverhampton over one mile and a half furlong. Before that, he had a one hundred and fifty-one days break following a twelfth place when racing in a class three event at Goodwood over one mile one furlong. It looks like he favours the shorter distance, which will suit him well today.