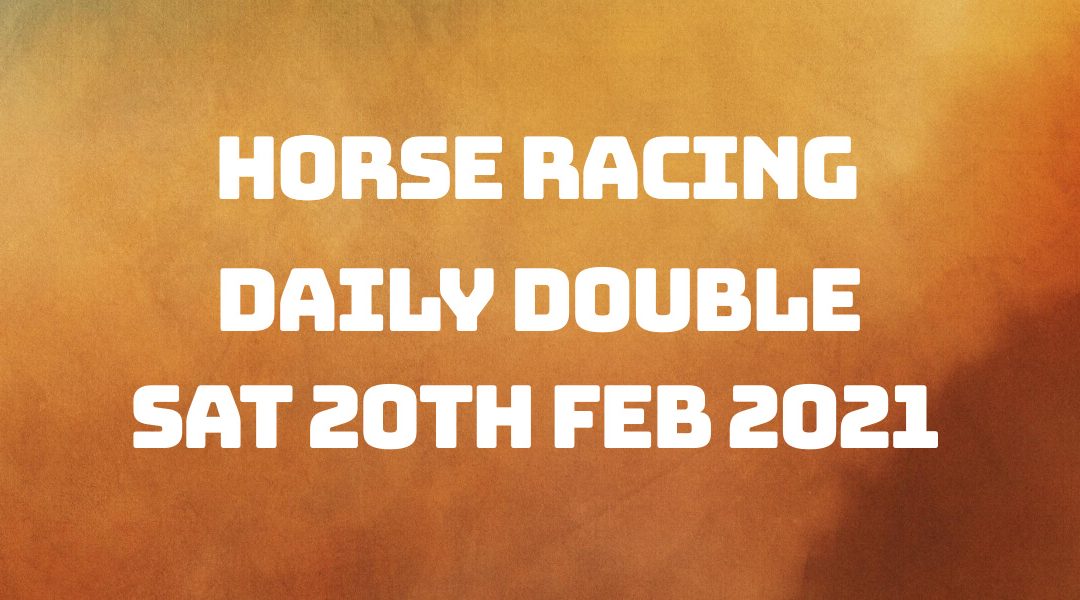 Yesterday our first selection Eclair D'Ainay ran in the 3.50 pm race at Kelso and won the race by just shy of three lengths, at odds of 2/1 SP at the bookies.

He ran an excellent race and was prominent throughout. Led narrowly at the eighth furlong, pushed three lengths ahead and ran readily in first place. Elvis Mail made a last-minute dash for it, but we held on very nicely for our first win of our double.

Our second selection Lakota Warrior ran in the 4.52 pm race at Kelso but unfortunately finished back in sixth position from eight, at odds of 10/11 SP at the bookies. He started well, taking the lead, but he soon weakened and was never really in it.

No luck on the double yesterday; we'll try again today.

Today's first selection is Shantou Flyer and runs in the 4.33 pm race at Wincanton.

The going at Wincanton is classed as heavy over today's jumps turf meeting. The race is a class three Handicap Chase, being run over three miles and one furlong. Six runners head to post, and the age criteria is for five-year-olds and upwards, with ages ranging from seven- to eleven-years-old. So plenty of experience amongst this lot today.

No horses have won their last race, with only Golden Sovereign being closest with a third-place finishing last time out. The potential threat could be Sizing At Midnight, who was unlucky when a falling at Wincanton but has solid form before that incident. I think Shantou Flyer will edge it on his second attempt for Paul Nicholls.

Our selection has picked up nine tips, three for Late Romantic and one for Sizing At Midnight and Fabulous Saga. Paul Nicholls looks to have the backing of the tipsters' panel here, and I have to agree, I'm confident of the win today.

Paul Nicholls has a recent run to form figure of forty per cent and has won seven of his last thirty races over the previous fortnight, placing in four of these.

Angus Cheleda is our jockey today and has won one of his most recent rides over the last two weeks, out of three rides in the same period. He also placed in one of these. Angus rode Shantou Flyer last time out and has won on him previously, so he knows the animal well.

Shantou Flyer last ran sixteen days ago and has won over the same distance previously. In his last race, he ran well but didn't quite have the power to win through. Previous to that, he landed a third-place finishing at Cheltenham and won a race at Fakenham by twenty-three lengths. Let's see if Paul has trained him back to this excellent form.

Today's second selection is Bob And Co and runs in the 5.00 pm race at Haydock.

The going at Haydock is classed as soft over their turf jumps meeting today. It is a class three Hunters' Chase over two miles and six furlongs. Ten runners are competing, and the age criteria is for five-year-olds and upwards—the youngest being a ten-year-old, the eldest a thirteen-year-old.

Bob And Co is going up in class today somewhat, but his last two attempts were both wins, with one by a long distance of ninety-nine lengths in a four runner race. Wishing And Hoping looks to be the apparent threat, with three wins from his last five races and two further places over the same five races. However, like Bob And Co, he is generally travelling up in class today, so my tip goes to our selection for sure.

Bob And Co has four tips to his name, The Worlds End six, Wishing And Hoping three and Ravished on just the one.

Paul Nicholls is our trainer today and has a recent run to form record of forty per cent. He's won seven of his last thirty races and added a further four placings to that total during the previous two weeks.

Sean Bowen is our jockey for this second selection in our double and has won one race from thirteen over the last fourteen days. He's placed in a further two to add to his total. He hasn't run for Paul lately, so I'm wondering if he has been lined up especially for this race. Sean has never ridden Bob And Co before, though, so it's not that he knows the horse. Tricky one, but sure Paul knows what he's doing.

Bob And Co last ran exactly just under one year ago to the day and is a proven distance winner over today's distance. His last run was at Fontwell in a class six, where he won by one and a quarter length. He also won over at Bangor by ninety-nine lengths – a rather strange race with only two horses finishing the race.

Best odds for our selections can be taken at 10Bet, with 13/8 readily available for Shantou Flyer and 11/8 for Bob And Co. The double works out to 6.23. Good luck, everyone.